The Teleplay System, also known as the Teleplay Modem[2], is an unreleased Sega Mega Drive modem developed by Baton Technologies. Originally intended for a January 1993 launch[2] (later pushed back to May[3][4], then August[5]) with a suggested retail price of $69[2] (later increased to $90[6]), the Teleplay's primary selling point was its support for cross-platform multiplayer between Genesis, NES, and SNES owners, as well as providing downloadable games and content as supporting services.[2] Ultimately, issues acquiring official development licenses and Sega of America's attraction to its primary competitor - AT&T's Edge 16 - resulted in the virtually-completed accessory being scrapped entirely.[7]

The Teleplay System boasted a then-impressive 2400bps modem for live, cross-platform play, and featured support for standard AT-spec keyboards and computer printers via a connector on the front. The Mega Drive version operates much like a 32X, being inserted into the console's cartridge slot and allowing a second game to be inserted from its top. Online gameplay was conducted by plugging a standard phone line into the console and subscribing to the Teleplay's paid service (rumored to be around $3 per hour of online gameplay[8]), and then joining a match through a rudimentary matchmaking service. In addition to live 2-player multiplayer, all titles feature the ability to play simulated matches against the computer[2], allowing Teleplay games to be enjoyed even when other players weren't online. 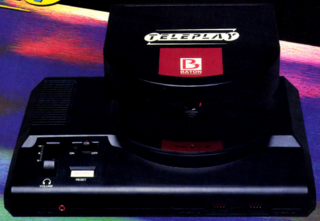 The Teleplay's most revolutionary feature is its support of cross-platform play, with the system reportedly having completed and fully-functioning live gameplay between its three supported platforms: the Nintendo Entertainment System, the Genesis, and the Super Nintendo (being achieved through specialized protocols in the game's code[2]). Baton Technologies' founder Keith Rupp recalls that at least three titles were finalized and ready for production by the time of the hardware's cancellation; this would have resulted in a total of nine separate UPCs (with each game having Genesis, NES, and SNES counterparts[2]), although contemporary advertising and modern research suggests that the Super Nintendo adapter may have never been realized. Despite this, his October 2003 Lost Levels interview provides a list of the company's staff, with a Dan Cervelli and Jeff Miller credited under "Super Nintendo development". A likely possibility is the completion of the games' respective Super Nintendo versions and compatible code, with the physical adapter being delayed until its hardware was finalized.

Baton Technologies was also producing a number of methods which potentially allowed the Teleplay to operate as a sort-of personal computer. The inclusion of keyboard and printer compatibility was intended for use with a line of cartridges which would offer more traditional software programs. Developed in conjunction with computer peripheral manufacturer Keytronics[2], the Word Processor would have been a simple word processor used in conjunction with the keyboard, and the Web Interface would have offered internet access through the then-popular online services Prodigy, CompuServe, and Genie.[2] Additionally, the Downloadable Cartridge, a rewritable Mega Drive cartridge which operates in a similar manner to the Sega Channel, would allow users to download a single game into its EEPROM memory over the Teleplay's dial-up internet connection. Even downloadable content was planned in the form of a dial-in 1-800 telephone number operated by Baton Technologies, advertised as offering "new levels, characters, powers and weapons."[2]

In 1990, American engineer Keith Rupp first conceived of the Teleplay System as a means for gamers to play head-to-head against others from across the country over the internet. Recognizing the potential for equipping the then-dominant Nintendo Entertainment System with online multiplayer capability, he began the process of assembling a team (largely staff from fellow Arizona developer American Game Cartridges) and shopping the idea around to possible investors. One early investor introduced Rupp to Nolan Bushnell, co-founder of Atari, who grew a strong interest in the hardware. With input from Bushhell, Rupp completed the first prototype. Initially known as the Ayota View (a name created by Bushnell as a reverse spelling of "a toy a"), it first made an appearance at the 1992 Winter Consumer Electronics Show[12] in Las Vegas, Nevada, where it was generally well-received.[7]

As development progressed, Bushnell made the decision to limit the modem's speed to 300 bits-per-second as a cost-saving measure. However, this meant that the Teleplay could no longer viably offer real-time multiplayer, rendering the hardware only suited to "slower" titles like puzzle or strategy games - games Bushnell was more familiar with from his experience with the Atari 2600. Additionally, Bushnell (already industry-known for his questionable business practices) only offered him a relatively-meager 5% of potential company profits, and strangely barred him for directly meeting with further investors. To complicate matters, Bushnell had used his industry fame to largely take control of development, with investors much more eager to listen to Bushnell than Rupp. The impending collapse of Bushnell's toy company Axlon resulted in the Atari co-founder soon pulling out of the project entirely, leaving its future uncertain.[7] 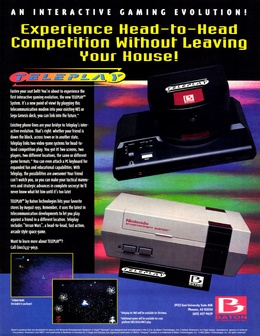 In 1992, Rupp independently developed a new iteration of the hardware, largely by himself. Now known under its final name of the Teleplay System, this "final" revision boasted a respectable 2400 bits-per-second real-time connection, and even contained a connection for AT keyboard (the common standard of the era).[7] Although the project was then progressing on the technical side, a lack of funding from investors forced Rupp to live and sleep at his office for much of the modem's later development, along with much of his team working significant overtime. However, the greatest hurdle to overcome would be the acquisition of an official development license. Both Nintendo of America and Sega of America charged third-party developers such a large sum to become licensed that Rupp found himself unable to build the funds for either purchase. This led to a situation where, despite established developers like Electronic Arts wanting to work with the modem during initial demonstrations, the deal would be cut short when "a suit would call higher up in the company and say they wouldn’t even consider making their games compatible with the Teleplay unless we were licensed."[7]

In July 1993, AT&T announced its partnership with Sega of America and PF Magic to develop the Edge 16 modem, a remarkably-similar modem accessory. Boasting compatibility with the Sega Genesis and 3DO, and with the monetary resources of AT&T to acquire official developer licenses, Sega of America ultimately decided to focus their attention on the Edge 16. Video game preservationist Frank Cifaldi states, "whether it was because of Keith’s meetings with Sega, his conversations with third party developers, or perhaps a premature magazine interview done by one of Baton’s investors, it was fairly obvious that AT&T caught wind of Baton’s plans and took it upon themselves to capitalize on their ideas."[7] Now that acquiring an official license was practically impossible, Rupp made the brave decision to carry on, regardless if the Teleplay was licensed or not - and hoping to beat the Edge 16 to market by some time. Rupp even planned intercompatibility with the Edge 16 to ensure the Teleplay could succeed by competing on price (and not game exclusivity).[7]

Keith recalls that "I wasn’t afraid of AT&T, although my investors were." Despite having a $300,000 first order to fill and manufacturing in Shenzhen, China[9] ready to begin, his investors got cold feet at the last minute and pulled the plug. The support of a company like AT&T frightened Rupp's investors, compounding the fact that Sega of America reportedly later refused to license the Teleplay whatsoever because of it's partnership with AT&T.[12] "If we had just fulfilled our first order, we would have made back all the monies invested in Baton up to that point and made a small profit." Ultimately the modem would be left virtually completed and entirely unproduced, with three multi-platform games completed and also ready for manufacturing. Baton Technologies was forced to close its doors, with Rupp having to pay his company's remaining $40,000 payroll through his personal credit cards.[7]

The Teleplay System was primarily advertised alongside Terran Wars - the first game announced for the system, and the intended pack-in game.[1] Later, Baton Technologies announced an additional three titles which would form the modem's official launch lineup: Build-A-Better Dinosaur, Order of the Talon, and BattleStorm.[2] An additional two games were announced in early 1993, for a total launch lineup of six compatible games.

As official licensing was always a shaky issue with Baton, advertisements instead focused on the Teleplay System's unique capabilities. However, when the topic of licensing was formally addressed, a Baton spokesperson stated the system "will be licensed by Sega but not by Nintendo", and that "the programmers at Baton have a perfectly legal way of bypassing NES encryption."[2] Baton was already banking on being able to acquire a license through Sega of America much more easily than its Nintendo counterpart.

Early promotional material for the Teleplay System features a markedly different vision for the hardware. The modem itself appears to have been intended as a loose, separate unit which plugs into the Mega Drive's controller port, with the image suggesting that a dedicated Control Pad would have formed the opposite end of the cable.[5]