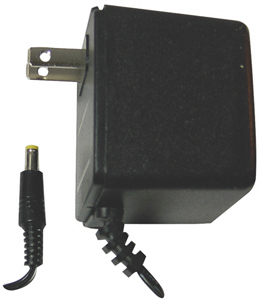 AC Adapter used for Genesis models 2 & 3, as well as the Sega Game Gear.

Consoles by Sega, and many other electrical devices require power, and this need is commonly addressed by an AC adaptor (ACアダプター).

Most modern homes are linked to a power grid, and offer power from electrical sockets. An AC adaptor takes some of that power and gives it to an electrical device, e.g. a Sega Mega Drive. Electrical standards vary between countries but a Sega Mega Drive typically requires only a certain amount regardless of origin, thus one role of the AC adaptor is to only allow a certain amount of power through.

It is called an AC adaptor as it converts alternating current (AC) into direct current (DC). An alternating current is used to help electrical impulses travel long distances but is useless in electrical equipment and thus needs converting. When travelling large distances, voltages (measured in volts, V) are kept high while currents (measured in amps, A) are kept low. This is not appropriate for home use. Though the science behind AC adaptors can be confusing for those not familiar with the laws of physics, the short description is that an AC adaptor gives a console life without destroying the internal components.

AC adaptors are a necessary evil - they are often big, heavy and cumbersome, and are prone to becoming hot after long periods of use. There are three "types" of AC adaptors in terms of design:

Sega chose to ignore the middle option for home consoles, leading to much frustration in the early 1990s when the company was releasing systems almost annually.

Prior to the Sega Saturn, AC adaptors were built into the plug, with their size often obstructing surrounding sockets in the process (and possibly even putting a strain on the wall). For one console (say, the Mega Drive) this is inconvenient but manageable. However, if someone wishes to purchase a Sega Mega-CD and Sega 32X, which each requiring their own similarly-designed power supply, problems can arise. In response, Sega released the Sega Power Strip in North America. The Sega Saturn and Sega Dreamcast have their AC adaptor within the console itself, meaning more ventilation is needed to keep the system cool.

Some adaptors are interchangeable without causing harm, but there are official standards in terms of voltage, current or even connectors. Just because a power lead looks as if it fits the connector size, this doesn't mean it is acceptably safe for all systems. All Sega consoles have their electrical requirements printed somewhere on the unit, and most power supplies have similar information printed on them. Some issues are not as obvious—you cannot use a Mega Drive model 1 power supply with a model 2 for example, but you can use it on a Model 1 Sega Mega-CD.

Consoles are often built around the country's electrical standards, so a Dreamcast from the United States is designed to work with a North American 120V, 60Hz electrical supply. A Dreamcast from the United Kingdom is designed for 230-240V, 50Hz; using a UK AC adaptor on a North American Dreamcast will destroy it if one does not use a step-down converter. Plug standards also differ between countries—the UK's type G plug will not fit in a US type A/B socket, so some sort of converter will be needed regardless (likewise for the television signal - the US uses NTSC, the UK uses PAL-I).

Note this list is incomplete. When dealing with power supplies, it is advised that you check the label(s) to make sure the numbers match up.

Intended for the Sega Master System, but will also function on a model 1 Sega Mega Drive.

1602s were built for the Sega Mega Drive (model 1) and both versions of the Sega Mega-CD. They will also function with a Sega Master System.

The MK-1479 was built exclusively for the Genesis 3 console.

The MK-4122 was built specifically for the Sega Multi-Mega.

Built for Japanese SG-1000s and Mark IIIs? They can also be used with the Japanese Sega Game Gear (Japanese version is using minus center and positive outer plug type)