As a successor to the original Mega Drive Mini, the unit is designed to resemble the Sega Mega Drive 2 (or Sega Genesis Model 2) at 55% the size of the original, but is incompatible with any of the original games or controllers, relying solely on its built-in library of emulated games and slots for two USB peripherals. Video is output at 720p 60Hz via HDMI.

The original plan was to create an entirely new mini console, though parts shortages as a result of the COVID-19 pandemic led to those plans being shelved and the Mega Drive Mini 2 to be made instead. This also resulted in a smaller production run than the Mega Drive Mini, as well as limited retail distribution through Amazon. 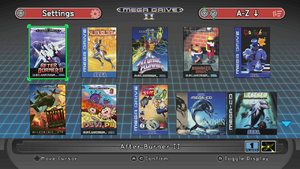 The menu interface from the European system.

The Mega Drive Mini 2 presents the user with a graphical interface displaying the covers of every game included on the system. Ten covers are displayed on the screen at a time, but the user can choose to display all games at once by pressing

, displaying their spines. The games can even be sorted alphabetically, by release date, by genre, by the number of supported players, by recently played, or have Mega-CD games listed first. The menu music is once again composed by Yuzo Koshiro.

Changing the system language in the settings menu will also change the menu interface to match the selected language, changing to a Japanese Mega Drive-themed menu for Japanese or Chinese, a Genesis-themed menu for English, French, Spanish or Korean (with the exception of European systems for these languages except Korean), and a PAL Mega Drive-themed menu for Italian and German. Most of the covers will also change to match those of the respective region, and alternate regional versions of the games can be played, however not all games have an alternate regional variant available and will remain the same. On the European system, most games are the North American versions, though a small number of games such as Robo Aleste, Sonic the Hedgehog CD and Soleil use the European versions though have the North American versions available via a menu that appears when starting the game or by changing the system language.

During a game, the user can call up System Menu at any time by pressing the  RESET  button on the console. From this menu, the user can save their progress to a savestate, with each game supporting up to four savestates. Savestates will also remember which region the game is set to, so if the system language is changed, and the savestate is loaded, the regional variant of the game that was played when the savestate was created will be loaded. The  MODE  button may also be used to open the System Menu, which can be configured in the settings to open the menu instantly (Quick Load) or to require the user to hold  MODE  for one or three seconds, or hold  START  instead. Configuring this setting to any setting other than Quick Load will allow the  MODE  button to be used in games that have a use for it (e.g. to enable free movement in Vectorman 2).

The settings menu gives the user the ability to alter the display in various ways. Games can be displayed in a 4:3 aspect ratio or they can fill the entire screen, along with an optional CRT filter that blurs the image and displays scanlines. When playing in a 4:3 ratio, the user can choose to have one of eight wallpapers displayed around the game screen to fill the blank space. The menu also includes a QR code that takes the user to a site hosting the original game manuals when scanned using a smartphone or tablet. New to the Mega Drive Mini 2 is a setting to choose between emulating the audio output of a Model 1 or Model 2 Mega Drive. Viewing the staff credits will display the boot ROM screens in the background, with the type being determined by the user's language and sound settings (e.g. setting the language to Japanese and the sound setting to Model 1 will display the Japanese Model 1 boot ROM screen).

While both editions of the Mega Drive Mini 2 contain 60 games, the lineup has been adjusted to better suit the region. Note that Sangokushi III is listed twice for both versions of the game, though both are officially counted as one game.

For a more detailed list that specifies what language versions are available for each game, click the following link:

In memory of Rieko Kodama
Presented by SEGA
© SEGA