Streets of Rage 3, called Bare Knuckle III (ベアナックルIII) in Japan, is a side-scrolling beat 'em up released by Sega in 1994 for the Sega Mega Drive. It is the third and final part of the Streets of Rage trilogy, and a direct sequel to Streets of Rage 2.

The city of Wood Oak recently experienced a cataclysmic event. An experimental weapon called "Rakushin" detonated in the city's suburbs, causing the deaths of 30000 people and wounded 80000 more. Alarmed with this terrifying event, Police Department assigns two of their top detectives, Axel Stone and Blaze Fielding, two of the heroes who saved the city in the past, to investigate the incident and bring those responsible to justice.

Meanwhile, tension rises in the Lima Region, inhabited by a number of nations looking for an excuse to start a war. One of the representatives of the Lima countries, General Ivan Petrov has been invited to the White House for peace talks but now he is reported missing.

Soon after these events, Axel and Blaze were contacted by a mysterious man named Gilbert Zan, who claims to be the man who invented the Rakushin. Zan claims that his research is being used by the powers who intend to use it for destructive purposes. But can he be trusted?

Is the horrible attack that took place in Wood Oak City somehow connected to the conflict brewing in Lima? Why General Petrov is missing? The timing is very suspicious. Is someone using the Wood Oak City as a testing ground for their new weapons? Are Lima countries potential buyers?

Too many questions, too little time. Every second wasted brings the city one step closer to disaster. The lives of the citizens under your protection, and possibly, millions of others are hanging in balance.

Bring the situation under control.

The element Rakushin is written in katakana in Japanese, suggesting that it is a name borrowed from another language. But a guess would hint at the fact that it could be actually derived from the word 烙心 i.e. burning core.

Streets of Rage 3 aimed to build on the success of its predecessor, so while the style of gameplay and control scheme is largely identical to its predecessors, significant changes were made to the overall structure of the game. Streets of Rage 3 is a faster-paced release with longer levels, a more complex plot (which in turn leads to more in-depth scenarios complete with interactive levels and multiple endings), and the return of traps such as pits. Dash and dodge moves were added to each character's arsenal of moves, and weapons can now only be used for a few times before breaking.

Changes to the fighting mechanics allow for the integration of weapons with certain movesets. Team attacks, absent from Streets of Rage 2 but available in the original Streets of Rage, make a return, and are occasionally used by enemies too. Blitz moves, performed while running, have also been altered and are now upgradable over the course of the game (predicated on how many points are earned per level). The current grade of the blitz move is given by the number of stars appearing below the user's health bar, from none to three. Death causes a downgrade, however holding the

button before a series of button combinations can give players access to the upgraded moveset at any point in the game, at the expense of the time taken to perform attacks.

Enemies are also smarter with weapons, and some can even steal health upgrades, and there are also several secret playable characters, unlockable after overcoming certain conditions during the game. Special moves also no longer drain the user's health - a separate, automatically regenerating bar is introduced for this purpose.

Either by design choice or oversight, back attacks (

button) give a very high amount of score in relation to the damage they do. Score-focused gameplay, therefore, focuses on (ideally only consists of) back attacks. This is different from the prequel, where throws gave the highest amount of score.

The attack names given in the below table are those listed on the back side of the poster coming with the Japanese release. The Western edition simply lists generic names.

Yuzo Koshiro revealed at the 30th anniversary of the 1st SoR that, although the American manual of SoR2 names Axel's blitz move as Grand Uppercut, he really wanted to render Ground Upper in the Japanese manual[23].

Players can pick some items up to help them going through the enemies:

Those items can be found directly on the ground or inside containers that must be broken.

Prototype screenshots show that at one point, a motorcycle stage was planned for Streets of Rage 3, with some leftover code being present in the final game ROM. It is unknown why this feature was axed.

In comparison to its predecessors, Streets of Rage 3 takes a radically different approach to its soundtrack. Though still composed by Yuzo Koshiro, it is heavily influenced by Detroit's hard techno scene, popular in Tokyo dance clubs of the time. The soundtrack gathered a mixed reception in 1994, though is retrospectively considered by many to have been ahead of its time, containing elements similar to the "trance" era of dance music which would grow in popularity in the coming months and years.

Koshiro developed a composition system for this game, called the "Automated Composing System". Using features such as a random note generator (programmed in C++) , the soundtrack has a much more experimental tone, particularly noticeable in tracks such as "Bulldozer", whose composition is almost entirely randomized.

Like its predecessor, Motohiro Kawashima also contributed to the game's soundtrack.

There are several inside jokes in the game. In the overseas versions, Axel screams "Bare Knuckle" during his blitz (running attack). Bare Knuckle is the original Japanese name of the Street of Rage.

Boss of the 4th level, Yamato yells "Mijin" when defeated and blows himself to pieces. This is a reference to a ninja magic in Revenge of the Shinobi and Shinobi III, which has the same animation and name. Unlike its Shinobi version, Yamato's Mijin does not help him to defeat the heroes.

Streets of Rage 3 is a controversial game among many thanks to Sega of America's heavy-handed localization policies of the era. Unlike previous releases, the differences between Bare Knuckle III and Streets of Rage 3 are extremely obvious, involving the removal of features, a vastly different story (riddled in plotholes and missing scenes), and a higher level of difficulty (made worse by the fact that on the "easy" setting, the overseas release will stop after stage 5). Reasons for this massive spike in difficulty for overseas versions are unknown. (During the mid 90s and early 20s, this trend of increasing difficulty was quite common among American publishers who, for some reason, believed that Japanese games were too easy for "hardcore" western gamers. Many other overseas ports, such as Devil May Cry for Playstation 2 also received a similar treatment.)

Of particular note is the use of "gender-neutral colors" (whatever that means) amongst the character sprites, which leads to inconsistencies with both Streets of Rage's cover art (in all regions) and the designs in previous games. Scantily clad female characters were covered up an entire miniboss (Ash) was removed due to his perceived homosexuality. These and other changes ultimately hurt critical reception in Europe and North America, with some reviewers urging Streets of Rage series fans to import Bare Knuckle III or skip this title entirely.

An interesting thing to note is the cover of the EU version, which is actually used by Mean Machines Sega magazine which featured the game. Sega of Europe loved the cover art so much, they purchased the rights to use it for the EU version's packaging.

Today, an unofficial fan translation is available for the Bare Knuckle III ROM, whose script was used with the permission of the original author. Other hacks bring back the lost motorbike stages and additional areas of round 6 which were originally removed in the western releases of the game.

Compared to its prequels, Streets of Rage 3 is a less common and more expensive game to find in its original Mega Drive form. It has, however, been released for the Japanese version of Sonic Gems Collection for the GameCube and PlayStation 2. The game also appeared in Sega Mega Drive Ultimate Collection for Xbox 360 and PlayStation 3. The game has also been released on the Wii Virtual Console, iOS and Steam. The iOS version was removed from sale on iTunes in 2015.[24] 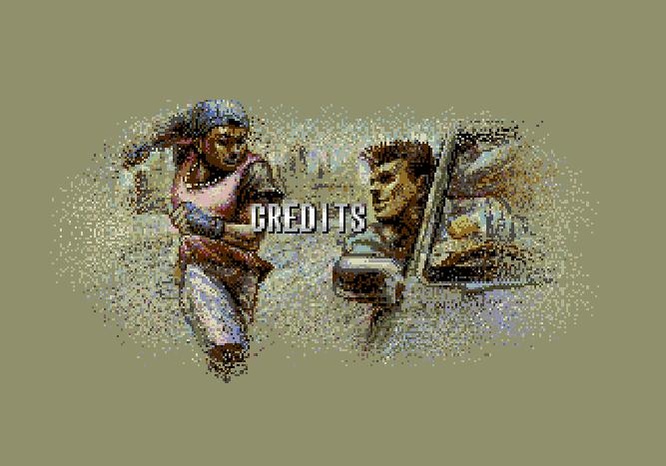