Back to: Streets of Rage 3. on Controller 2, and press

on Controller 1. This will extend the maximum number of starting lives from 5 to 9. . A different sound will confirm correct entry, and a level select will now appear in the Options menu.

The level select will only go up to Stage 6, but Game Genie code CC2T-JAC2 will enable Stages 7A and 7B in this menu. 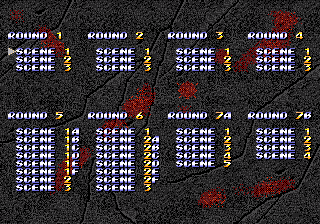 A more advanced level select is hidden in the game, requiring Pro Action Replay code FFFB01:0010 to access it. Unlike the above, this screen allows starting from exact scenes, including the unused motorbike levels (see below). This screen can be accessed in both Bare Knuckle III and Streets of Rage 3.

Play as the same character on Control Pad 2 while selecting 2 Player or Battle. Both players will now be able to select the same character as each other. Defeat Bruce/Danch without defeating Roo/Victy in Stage 2. When continuing after running out of lives, he can be selected.

Alternatively, Roo can be unlocked at the beginning by holding

at the title screen. In Streets of Rage 3, defeat Shiva in Stage 1, and hold

on Control Pad 1. When continuing after running out of lives, he can be selected. In Bare Knuckle III, defeat Ash in Stage 1, and hold

on Control Pad 1 when dealing the final blow. When continuing after running out of lives, he can be selected, albeit with a different palette than his boss form.

As the Ash boss is removed from the localised Streets of Rage 3, he can only be unlocked legitimately in the Japanese Bare Knuckle III. However, the character is still intact in the Western version and can be enabled as a playable character by using Game Genie code BAWA-AAA0. Start the game as Skate, and lose your first life without getting any points. When Skate respawns,

will trigger a rapid flailing attack that will down most enemies in one hit. This effect will last for the rest of the game, regardless of whether Skate dies again or continues are used. On the Player Select screen, highlight Zan and hold

on both Control Pads, and keep the buttons held until the first level begins. An extra animation exists for the Bare Knuckle III title screen in Japan. After about ten flashes of the "Press Start Button" text, lightning strikes, however this is never seen, as the game transitions to demo mode before the animation can occur.

It can be viewed by using the Action Replay code FFF6B0:0001, which disables the demo sequence.

Two unused levels exist within the game. These were meant to be auto-scrolling stages where the players avoid obstacles while riding motorbikes. Neither level is finished in either the Japanese Bare Knuckle III or the localised Streets of Rage 3.

In the final builds of the game, the player graphics do not load and in Bare Knuckle III's case, the frame rate drops to single-digit figures after a couple of seconds. Holding any button or D-Pad direction brings the speed back to normal, allowing the player to see how these sequences would have played out.

Development screenshots suggest that these two stages were once in a more playable state, and that a third stage, set in the city streets, also existed. The first takes place in a wasteland where the player has to get to Mr. X's base. Initially a biker throws petrol bombs, then speeds left and right across the screen.

In Streets of Rage 3 this level ends straight away, therefore it cannot be seen. The second level is set on a bridge, with Donovan chucking barrels at the player in an attempt to stop them from reaching the White House/city hall. Later he comes around the side and starts throwing knives, before returning to barrel throwing. At the end of the sequence, the vehicle crashes, launching Donovan through its back window.

In Streets of Rage 3 the pointers for the graphics and palettes are pointing in the wrong place, meaning the entire level is corrupted.