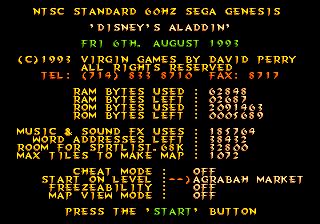 The debug menu from Disney's Aladdin for the Sega Mega Drive. It is normally inaccessible without an in-game cheat code.

Hidden content refers to content that is not documented in any instruction manuals nor seen in normal play. This can range from cheats that require the player to input hidden passwords or button sequences at certain points, Easter eggs programmed in by developers for clever players to find, debugging tools, unused code, or even features that had to be cut due to developers struggling to get a game in stores by a certain date. More often than not, scrapped features can be accessed using in-game cheats, through the use of cheat devices such as a Game Genie or Action Replay, or by hacking/datamining.

This category documents all of these hidden tidbits found in games released for Sega systems or published by Sega, be it cheats, unused graphics, music, or otherwise. This does not include content unlocked in normal play unless there is a hidden code to unlock it immediately.