Back to: Streets of Rage 3.

Although no prototypes of the original Japanese version, Bare Knuckle III, have been found and released so far, several prerelease screenshots and pieces of art have been found over the years.

The characters portraits on the selection screen had a complete change of style towards the end of development.

An early version of the character select screen can be seen being played on the Sega Video Magazine #February 1994, australian TV show "The Zone" episode dated "11/06/1994" and can also be found in the australian magazine Hyper issue 007.

A very high quality of the early version of Blaze portrait can be found in the Official SEGA Magazine UK issue 3.

More prototype versions of Skate portrait can also be found in magazines:

A screenshot of that prototype character select screen also show that Kan was the first considered name for the kangaroo we all know as Roo/Victy.

Art designer Jun Matsuo opened at one time a blog with his portfolio of works, including one of the first games he worked on: Streets of Rage 3. His portfolio showed an unused cutscene depicting Zan and the dying General as well as some differences in cutscenes existing in the final version.

Official Sega Magazine UK issue #3 has the exclusive details about part of the story that has been removed from the final version of Bare Knuckle III:

Many scenes were changed from the prototype screenshots published in magazines to the final version of the game.

Unused Motorbiking level in a street.

Besides the bridge and the wastelands areas, another bike scene was marketed and published in various magazines, showing what appears to be a shopping district mainly colored in blue.

Only a few screenshots of them exist, with one only seen on the back of the VHS Sega Video Magazine issue #January 1994. No data for this stage is found in any of the known dumped ROMs. Given the nature and date publishment of these screenshots, it is almost certain these were not mock-ups. 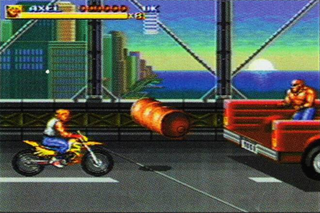 An unique screenshot shows an actually playable version of the bridge stage. Only seen in the Australian magazine Hyper issue 007, which is also the only one to detail how it played at the state of the build they could preview, suggesting they actually could play a non-final build themselves:

This definitely proves the development team lacked time to make it a viable scene.