Shining Force II, known as Shining Force II: Inishie no Fuuin (シャイニング・フォースII 古えの封印) in Japan, a sequel to Shining Force. It was released in Japan for the Sega Mega Drive in 1993, before seeing overseas releases in the following year.

Despite a multilingual cover and manual in PAL regions, Shining Force II is only thought to have been translated from its original Japanese incarnation into English. The English script, like many RPGs of the era, has many inaccuracies and continuity issues with other Shining games, being said to drastically alter plots from Shining in the Darkness and Shining Force in the process.

In a shrine south of Granseal Castle, a thief named Slade unwittingly breaks the power of a magic seal by stealing the jewels of Light and Darkness; this unseals the demon king Zeon trapped therein. The following day, King Granseal falls sick when he is attacked by an unknown creature. Sir Astral, the court's adviser, along with his apprentices, Bowie the squire, Sarah the healer and Chester the knight, investigate these events at the castle. They find that the door to the Tower of Ancients has been unlocked and stands open.

Greeting their arrival in the tower are devils named "Gizmos" springing forth to attack, though their ultimate intentions are unknown. Upon their defeat, the Gizmo that appears to be the leader flees. It is discovered thereafter to have possessed King Granseal. Sir Astral and the nascent Shining Force visit the king, finding him possessed. Sir Astral exorcises the demon, which promptly flees. The Minister, in place of King Granseal who is looking over a fainted Astral, then orders the slaying of the Gizmo by a platoon of Granseal's soldiers. The Gizmo subsequently possesses the king of the neighboring kingdom of Galam. Bowie and his friends are captured by the Galam military: while in their dungeon, they meet the thief, Slade. When the party breaks out, Slade helps Bowie retrieve the Jewel of Light and accompanies his party back to Granseal, which has been invaded by Galam forces. They find the possessed King Galam inside the Ancient Tower, who has taken Princess Elis as a hostage. In the ensuing battle, Bowie wrests the Jewel of Darkness from him, but he is unable to rescue Elis, and the ground around the Ancient Tower collapses.

With the island is now being ravaged by earthquakes, entire population decide to evacuate the island and escape to the continent of Parmecia, to rebuild their kingdom and hopefully, one day take the Granseal Island back and rescue the Princess. One year later, New Granseal is visited by Peter, a phoenix and a servant of the God Volcanon. Believing that Volcanon can help them take their island back, Sir Astral orders Bowie and others to visit Volcanon and seek his help. Bowie and friends must now travel across Parmecia to gather allies, solve the riddle of the Jewels, obtain the Force Sword, and seal away Zeon once more.

Shining Force II is a tactical role-playing game. The player assumes the role of the Shining Force leader, Bowie, and plays a series of turn-based tactical battles. Battles take place on a square grid, and each unit occupies a single square. Battles are turn-based. Each turn, a character can move a fixed amount of squares along the battlefield, determined by its Movement statistic, and perform one action: either attack, cast a spell, or use an item. Some commands, such as equipping or dropping an item during the turn, do not count as actions. The order of turns is determined by the unit's Agility score and a random seed. Characters gain experience points from attacking, using magical abilities, and defeating foes, which allow them to gain levels that increase their statistics and sometimes grant them new abilities. Defeated enemies also drop gold, which can be used to buy weapons and other items. Units are defeated when they lose all of their hit points. They receive a defensive benefit from the Land Effect of the tile on which they are standing.

When not in combat, the player can explore towns and other locales, talk with people, and set the members and equipment of the army. Each town has a priest that can promote characters once they reach a certain level, resurrect fallen characters, and save the game. Some towns have a headquarters where the player can inspect and talk with allies and decide who joins the battle party. Later, the player obtains a Caravan that acts as a roaming headquarters and can store surplus items. While traveling through town or moving throughout the world, one can find both visible and hidden treasures and interact with certain objects.

Each ally unit is represented by a character with a background and personality. Some of these characters are hidden, requiring specific events to occur before they join the force. Each ally unit also has a class, which defines the abilities for that unit. These abilities range from what type of weapons they can use to what kind of spells they can learn. Units can become stronger by fighting enemies and performing various actions which give them experience points, which allow them to gain levels and improve their statistics. Once a unit reaches level 20, that character has the ability to advance to a more powerful class through promotion. Some characters have two different classes they may be promoted to, one of which is only accessible using a special hidden item. Characters have the following statistics:

Statistics can also be improved through the use of items. The player can assemble an army of at most 12 members; members can be substituted in between battles, with the exception of Bowie, who must be present in every battle.

The battle is won if all enemies are defeated, or if the enemy commander is defeated. If Bowie is defeated in combat or withdraws, the battle is lost and the player is returned to the nearest town, where the player can recover allies and fight the same battle again. The Force keeps any experience that is obtained, regardless of the battle's outcome, but players lose half of their gold if the team leader is defeated.

The player can find pieces of Mithril hidden throughout the game. Near the end of the game, the player can find a dwarven town with a blacksmith who can use the Mithril to forge special weapons. Mithril weapons are more powerful than regular weapons and often have special effects, such as improving secondary statistics or casting a spell when used as an item. The player can also find cursed items, which deal especially high damage but reduce a secondary statistic and have a chance of stunning the character for a turn or doing a small amount of damage to the wielder. Cursed items can only be unequipped by having a priest remove the curse.

The spell level requirements include the level of the character at promotion. For example, if Bowie is promoted at level 20, he learns Bolt at level 2 after being promoted.

Items are sold in shops, found in chests, or sometimes dropped by defeated foes.

There is only one of each promotion item hidden in the game, with the exception of the Vigor Ball, which appears twice in the overseas versions of the game.

There are 15 Mithril pieces hidden throughout the game, which can be used at the dwarven blacksmith near the end of the game to craft Mithril weapons.

Sorcerer spells are stronger when they hit fewer units.

Despite being preceded by the successful Shining in the Darkness and Shining Force, Sega remained reluctant to back development on Shining Force II, giving it the same limited budget as previous entries in the series and indirectly threatening the break-up of Sonic! Software Planning should the game not deliver as hoped. This put enormous pressure on producer and programmer Hiroyuki Takahashi and his team, many of whom dropped out before production of the game.

Shining Force II is amongst the most successful Mega Drive games in Japan, though also garnered some popularity in North America and Europe. It has since been released as part of the Wii's Virtual Console service and through numerous compilations.

Sonic the Comic included "Shining Force" comics strips. The plot followed Shining Force 2 heroes trying to stop followers of Zeon from bringing demon into their world. The comics also brought Max in, the hero of the first Shining Force. The single story arc was called "The Curse of Zeon" (issue #73 to issue #78). It was the last big (6-7 issues) non-Sonic story arc featured in Sonic the Comic, not counting short Decap Attack stories.

The overseas localization of the game lacks the ability to search in battle. This makes several items unattainable in these versions, including the Right of Hope and Life Ring items. However, a second Vigor Ball was added to elven town in the overseas versions, which allows players to promote both Sarah and Karna to the Master Monk class (giving the party up to three Master Monks once Sheela is found).[24] 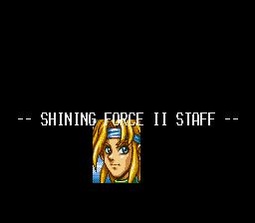