Shining the Holy Ark (シャイニング・ザ・ホーリィアーク) is a role-playing game in the Shining series of games. It was developed and published by Sonic! Software Planning for the Sega Saturn in 1996. Like the first entry in the series, Shining in the Darkness, it is a first-person dungeon crawler.

The game turned away from the saga of the Devil Kings that was followed by the previous installments of the series and instead introduced the saga of the Vandals and the Innovators, which would be continued in Shining Force III.

Mercenaries Arthur, Melody, and Forte are hired by the King of Enrich to hunt down and capture a renegade ninja by the name of Rodi. The group pursues Rodi to the nearby mines where, after a brief skirmish, the mine caves in. All four characters are gravely injured, but they are soon healed and possessed by strange spirits. While those inhabiting Arthur, Melody, and Rodi seem benevolent, Forte is occupied by an evil spirit. The three unwitting heroes embark on a journey to prevent the revival of the legendary Thousand-Year Kingdom, which would return the world to an age of darkness.

The game takes place ten years before Shining Force III. While in the town of Enrich, Arthur and the others meet a young boy named Julian. He tells them that his father went to investigate a haunted mansion in the woods but never returned; since that time, he has been in the care of a family friend. It is later discovered that Julian's father was killed by Galm, one of the mythical Vandals that ruled over the world during the time of the Thousand-Year Kingdom. His father's death compels Julian to seek revenge against Galm, which sets into motion his involvement in the events of Shining Force III. 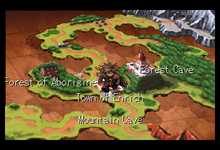 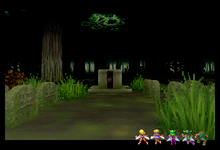 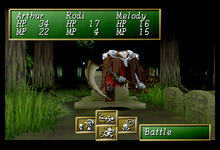 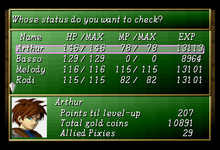 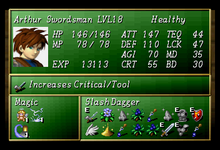 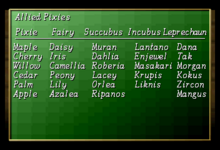 The game is a first-person dungeon crawler. The player explores towns and dungeons in the first-person view. Towns contain buildings where the player can buy weapons, armor, and items, save the game, rest in an inn, revive in the church, and talk to townsfolk. Dungeons contain battles where the party can gain experience and gold and find items. Exploration retains the traditional node-based movement from Shining in the Darkness rather than using continuous, free-form movement like most first-person games of the time. The player starts the game with three characters, with new characters joining as the plot develops over the game. The party can consist of as many as four characters, but additional characters can be kept in reserve and swapped in as needed.

The game is viewed from the perspective of the main character, Arthur. He moves forward with

. He can move sideways with

to move through corners in fewer steps. He dashes with

, which allows him to move more quickly (and can be used to knock down some doors). Some objects can be pushed by moving into them, which is sometimes necessary to solve puzzles or uncover secret passages. Arthur looks left and right with

or up and down with

; the player can reset the camera position to straight ahead with

Towns and dungeons are accessed from the overworld map. New locations are added as the player completes dungeons and progresses the story. The player chooses a location on the map using the D-Pad and travels to that location with

. The player can pan around the map by holding

while moving the D-Pad.

The game uses a cross-shaped menu system similar to the other Shining games. The menu is invoked with

always opens the menu but pressing

performs a default action if Arthur is near something (such as inspecting an object or talking to a non-player character). The menu contains icons for searching the area, using magic, managing items, or checking the status of members of the party. An icon is highlighted by pressing its respective direction on the D-Pad and selected with

. Menus are dismissed with

Dungeons include locations such as caves, shrines, forests, and a mansion. The player must explore the dungeon and often find items or solve puzzles in order to complete it. Enemy encounters happen randomly as the party moves through a dungeon, and the dungeon typically culminates in a battle with a powerful boss enemy. The game automatically makes a map of the explored areas of the dungeon, which the player can view with  START .

Battles are turn-based and conducted through a similar menu system. When an encounter starts, the player can choose to fight, to substitute party members, or to try to retreat and avoid the battle. Battles maintain the first-person view, but allies move into view as they perform actions. On each turn, a character can be ordered to attack, cast a spell, use an item, or defend (reducing damage taken for that round). Characters have a chance of performing a unique Power Attack that does additional damage or sometimes has other effects, such as regenerating lost health or stunning opponents. Some enemy attacks have a chance of applying a negative status effect to the target, such as poison, which does a small amount of damage on each turn (or as the character walks when out of battle), or paralysis, which stuns the character for a number of turns. Such status effects can be removed by special magical abilities or items.

At the end of a successful battle, the characters gain experience and gold from defeating enemies. After earning enough experience, they gain levels that increase their statistics. Statistics include:

If Arthur, Melody, or Rodi fall in battle, they are revived after the battle with a single hit point. If another character dies, he or she can be revived by a priest in town or by resurrection spells or items. If the entire party is defeated in battle, the party reawakens in church where the game was last saved (at the cost of half their gold). In between dungeons, the party can rest at an inn for a small fee to restore their hit points and magic points.

Throughout the kingdom, the player can find "pixies," who befriend the party and can be used to attack enemies at the beginning of an encounter. There are five types of pixie (pixie, fairies, succubi, incubi, and leprechauns) and ten of each hidden throughout the game for a total of 50 pixies. When a group of enemies appear, they enter the screen from a certain direction, and each type of pixie specializes in attacking enemies that come from a particular direction. For example, leprechauns only attack if enemies come from underground, while fairies only attack if enemies drop down from above. Pixies attack all enemies in a group regardless of how they entered, so when enemies appear from multiple directions, the player can use pixies corresponding to any of their directions.

and sending them to attack with

. If the player selects the right type of pixie, it deals some damage to the enemies and increases the amount of gold and experience points earned from the encounter. The pixies attack in a group, so the more of them that the player has found, the more damage that they collectively do. Pixies can help the party defeat enemies before they have an opportunity to attack. The pixies only attack once at the beginning of the encounter and cannot be used against bosses. 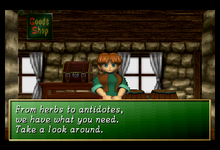 Items are sold in shops, found in chests or hidden places, or sometimes dropped by defeated foes.

Some equipment is bought from vendors but many items are only found hidden in the world. Some items have a chance of being offered by a vendor as a "Special Deal" in certain towns.

Mithril items are forged by the blacksmith in Desire Village. Accessories cost 800 gold and a piece of Mithril Ore; weapons and armor cost 12,000 gold and a Mithril Ingot.

Some items are cursed. They deal especially high damage but have adverse effects such as reducing a secondary statistic or stunning the wielder occasionally. Cursed items can only be unequipped by having a priest remove the curse.

Most usable items are consumed when they are used, but some items (such as the Pixie Bell or some equippable items such as the Shield Ring) can be used multiple times. These items have a chance of breaking each time they are used. When this happens, the item must be repaired by a vendor in town (for a fee) before it can be used again. 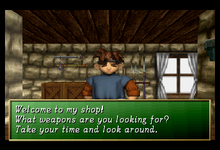 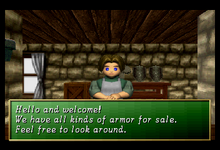 Accessories can be equipped by all characters unless otherwise noted. 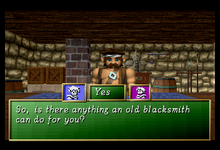 Many Ninja and Kunoichi spells are the same as the spells of other classes but have different names and icons. 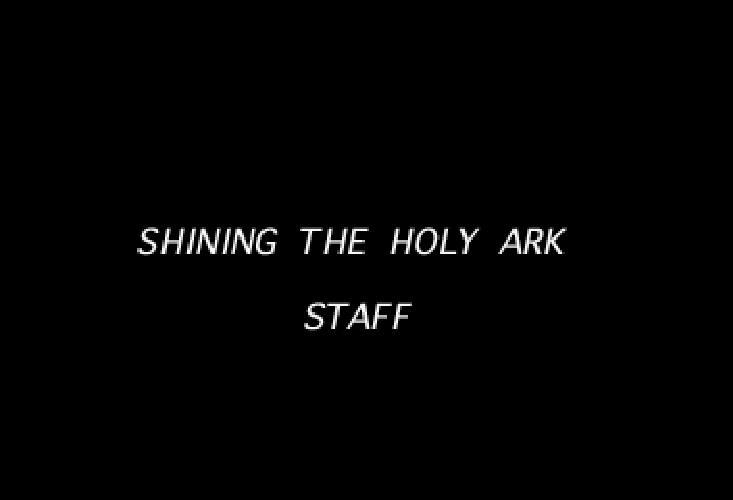 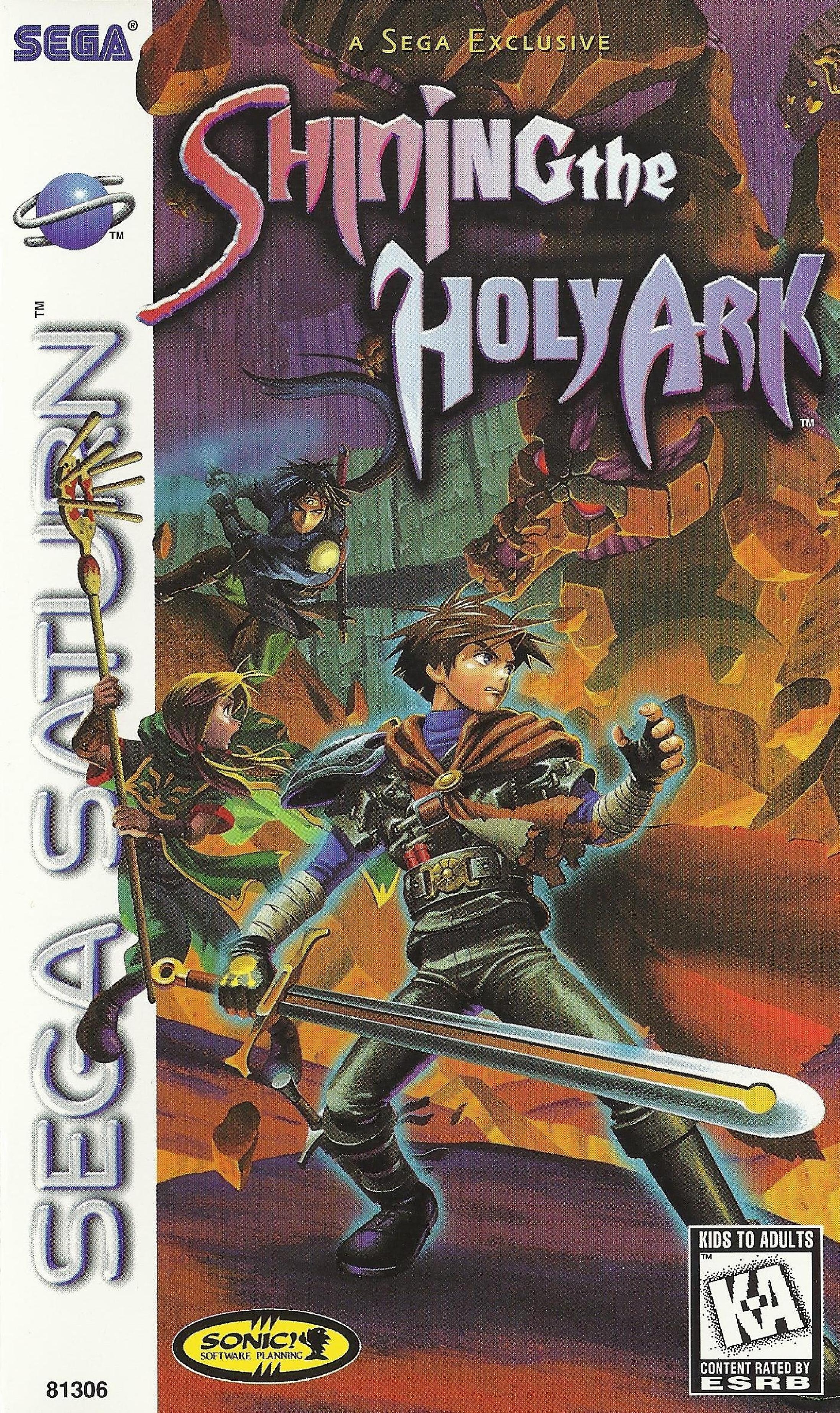