The game is broken into four "Books" comprising 53 battles in total, more than any other Shining Force game.

Towards the Root of Evil

The ambassador of Cypress, Woldol, visits Gardiana and presents a jeweled box as a gift for Queen Anri. Opening the box places her under a sleep spell, which Woldol declares that only King Edmond of Cypress can awaken her from. Gardiana launches an invasion of Cypress in retaliation, but a month passes and no word is heard from the Gardiana army.

The player controls Nick, a visitor, who is chosen to be the new leader of the Gardiana Shining Force. The party travels to the kingdom of Cypress to rescue Gardiana's captive soldiers and find a way to cure Queen Anri. On their journey, they are joined by members of the Cypress resistance force, who are fighting to free Cypress from the influence of Woldol, who murdered the rightful king and installed Edmond as a puppet ruler in service to the evil god Iom. The Gardiana army also learns that Nick is the son of the late king.

In a final assault on Cypress's castle, Edmond is killed. Nick battles Woldol using the Sword of Hajya, which can only be wielded by those of the royal bloodline of Cypress and is the only weapon which can break Iom's power. Though victorious, Nick is infected with a venom that turns his right arm to stone. With Queen Anri cured by Prince Nick's actions, Gardiana becomes Cypress's ally.

Cypress and Gardiana are now at war with Iom, a nation devoted to the evil god of the same name. The player now assumes the role of Deanna, a young man found wounded by the cliffs near Cypress's castle by two young Cypress soldiers, Natasha and Dawn. Nick and his troops depart to battle Iom, leaving Mayfair (a former member of the Cypress resistance) and several soldiers in charge of the castle. Once recuperated, Deanna joins them on guard duty, and though shy by nature, he begins to bond with Natasha.

An Iom agent steals the Sword of Hajya from the castle. A small team of young soldiers left to guard the castle, led by Natasha and guided by Mayfair, set out to hunt down the thief and redeem the Sword of Hajya. Their pursuit takes them to the neighboring kingdom of Emild, whose ruler has been sacrificed to Iom and replaced with the shapeshifting general Gordon. They recover the Sword of Hajya from Gordon, but immediately after a mysterious benefactor informs them that Prince Nick was defeated and taken prisoner.

Natasha's force now heads to Iom to rescue Prince Nick. Their mysterious benefactor repeatedly comes to their aid but refuses to identify himself. They learn that Warderer, the king of Iom, is sacrificing members of royalty to Iom in order to summon the god to their world and that he intends to make Nick the next sacrifice.

When the Cypress force confronts Warderer, General Hindel of Iom rescues Nick. Nick explains that Hindel betrayed Iom in order to save Deanna, Hindel's brother and that the Cypress force's mysterious benefactor was sent by Hindel. Deanna had in fact been wounded by a Cypress soldier while serving in an invading force from Iom. Following this revelation, an enraged Warderer kills Hindel and sacrifices himself to Iom, thereby summoning the evil god. Nick and his men defeat Iom, sending him back to Hades. With the war over, Natasha and the others return to Cypress with Prince Nick. Deanna ultimately decides he must return home to Iom, despite his love for Natasha and the new friendships he has formed in Cypress. But Natasha, who has fallen in love with Deanna, insists on going with him.

The player again assumes the role of Nick. Several months after Iom's defeat, Prince Nick's coronation ceremony is interrupted by an old woman named Dava. She asserts that Nick is unworthy of being crowned king and kidnaps Queen Anri. To prove himself worthy of the crown, Prince Nick must lead the Cypress army and his friends from Gardiana to rescue the lost queen.

Nick and his friends are visiting the most historic museum in Cypress when the exhibits of Nick's greatest enemies suddenly come to life.

Shining Force CD is a turn-based tactical role-playing game. The player progresses through a series of turn-based tactical battles interspersed with short cutscenes. Battles take place in square grids, and each unit occupies one square. Each unit can move up to a fixed amount of squares along the battlefield, determined by its Movement statistic. Depending on its location relative to enemies and to allies, a unit can also perform one action: attack, cast a spell, use an item, or search the area. Some commands, such as equipping or dropping items, do not count as actions. The order of turns is determined by the unit's Agility score and a random seed. Characters gain experience points from attacking, using magical abilities, and defeating foes, which allow them to gain levels that increase their statistics and sometimes grant them new abilities. Defeated enemies also drop gold, which can be used to buy weapons and other items. Units are defeated when they lose all of their hit points. They receive a defensive benefit from the Land Effect of the tile on which they are standing. Between cutscenes, the player is allowed to save the game, promote characters, resurrect fallen characters, and buy and sell weapons and other items at a store. The game features simplified, menu-driven camps that replicate the headquarters, priests, and shops of the Mega Drive games.

Each allied unit is represented by a character with his or her own background and personality. Each allied unit has a class, which defines a set of abilities for that unit and determines their spells that they can learn and the weapons that they can equip. A unit can be promoted to another class at any level between 10 or 20. Upon promotion, the character's level resets to 1 and statistics are reduced by a fixed amount, although they begin higher if the character is promoted at a higher level. Characters have the following statistics:

Statistics can also be improved through the use of items. The character's race can also affect how he or she performs in battle. For example, elves are less affected by rough terrain but centaurs are more affected. The player's army can consist of as many as 12 members, and members can be swapped in and out of the active party in between battles, with the exception of the team's leader, who must be present in every battle.

The goal of each battle is to defeat all enemies or sometimes to defeat the leader of the enemy force. The Shining Force is defeated if the team's leader falls in battle. Defeated characters can be revived after each battle. The player can also choose to escape the battle by casting Egress with the leader of the Shining Force. Even if the player army is defeated, the player can recover allies and retry the battle. The Force keeps any experience that is obtained, regardless of the battle's outcome, but players lose half of their gold if the team leader is defeated.

The game is divided into four "Books." The first two Books, which are available immediately and can be played in either order, contain the adapted versions of the Shining Force Gaiden games. Book 3 is a new scenario that becomes available after completing the first two Books. Character statistics from Books 1 and 2 can be carried over to Book 3 by saving the game on a CD BackUp RAM Cart since the Mega-CD's internal memory is insufficient to store all the required data. Book 4 is a special battle that is unlocked by finding a hidden item in Book 2 and completing the first three Books.

The spell level requirements include the level of the character at promotion. For example, if Nick is promoted at level 10, he learns Bolt at level 6 after being promoted.

Most of the characters from the first two Books are available to use, with the notable exceptions of Mayfair and Gyan. The game can carry over the statistics of the player's characters from the previous Books. If not continuing from previous saves, the game provides the characters with a set of default statistics. For characters who are available in both Books, the game selects the version that the player has leveled up higher. Hidden characters are only available if they were found in the previous Books. Prince Nick is the leader of the Shining Force, and Mayfair is its advisor.

Book 4 consists of a single battle and always contains the same roster of characters rather than allowing the player to choose a party as in previous battles. The game can carry over the statistics of the player's characters from Book 3. Otherwise, it provides the characters with a set of default statistics. Prince Nick is the leader of the Shining Force.

Items are sold in shops, found in chests, or sometimes dropped by defeated foes.

Weapons in Book 3 are found by searching or dropped by fallen enemies. 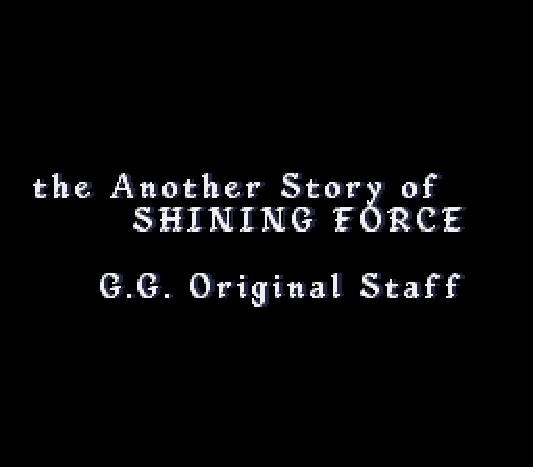 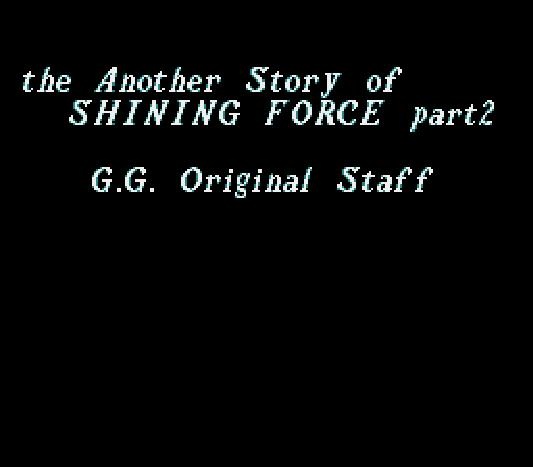