OutRunners (アウトランナーズ) is a sequel to the 1986 Sega classic OutRun and was developed in 1992 and released in early 1993 for the Sega System Multi 32 arcade platform.

OutRunners follows a similar format to OutRun, in which the player is tasked with driving across the world within a specified amount of time. There are, however, twice as many areas as OutRun in OutRunners, as the world is divided into east and west (selectable after the first stage). Whereas OutRun took place in Europe and Turbo OutRun North America, OutRunners spans the entire globe.

The superior System 32 hardware allow for vastly improved graphics, eight selectable cars (a scrapped plan for the original OutRun) and more music tracks (including those featured in the original OutRun game). It was always distributed as a two player deluxe cabinet (hence the "System Multi 32" name), and it is possible to link two cabinets together to create a four-player racing experience. It was the first OutRun game to allow more than one player to compete at once.

Like the original OutRun, the journey in OutRunners contains many forks in the road, leading to one of ten possible endings. Players all begin at the same location, but are given a choice whether they want to take the eastern or the western routes. Some areas are repeated for both sides, though it is impossible to visit the same location twice in one outing. 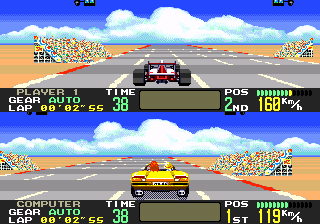 The Mega Drive port of OutRunners is always displayed as a two-player game, but it does have a secret car from Virtua Racing.

Though it was the most popular game for Sega's Multi 32 hardware, unlike its predecessors OutRunners only received one home console port, to the Sega Mega Drive in 1994. In this port, the screen is split horizontally into two in an attempt to mimic the two screens of the System Multi 32 platform. This, along with the reduced graphics quality and scaled back special effects, meant this version of the game is often the subject to harsh criticism. For some reason, Data East published the game in the US; it was not released in Europe.

There are some slight differences between the Japanese and North American versions. Entering

at the title screen of the Japanese Mega Drive version, selecting arcade mode with

allows the user to play as a secret car, "Virtua Formula", otherwise known as the car from Virtua Racing. This option comes complete with a selection of sound effects and music jingles from the game. Whereas the North American option allows you to input the code (and get a confirmation noise), you cannot drive this car.

There would not be another OutRun game released until 2003, when OutRun 2 was brought to Sega Chihiro hardware.

Additionally, the name Miyu Tsukamoto is present in the ROMs.