The S.S.T.Band (エスエスティーバンド, Sega Sound Team Band) was a group formed by Sega sound employees during the late 1980 and early 1990s. They specialised primarily in rock versions of Sega arcade games from this era, though also performed some original works. 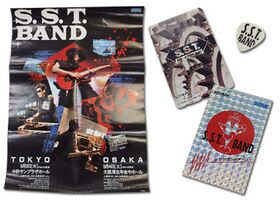 An assortment of S.S.TBand merchandise.

At its core, the S.S.T.Band consists of keyboard player Kimitaka "HARRIER" Matsumae and guitarists Jouji "GALAXY" Iijima and Koichi "MICKEY" Namiki. Shingo "BURNER" Komori was the band's bass player, who was replaced with Masato "TURBO" Saito in 1989. Hiroshi "HIRO" Miyauchi (keyboard) and Takehiko "THUNDER" Tanabe (drums) were part of the group before being replaced in 1990 by Takenobu "R Saburo" Mitsuyoshi and Hisanori "SPLASH" Kumamaru, respectively. Issei Noro was a guest guitarist in 1989, who along with Yoshihiro Kunimoto arranged some of their performances.

The group officially disbanded in 1993, though have met up on various occasions since.

Note: names/formatting may be incorrect