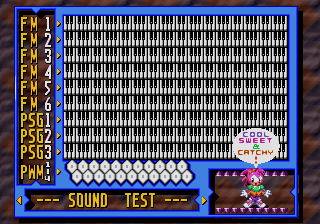 When it comes to its electronic games, Sega has been highly regarded for its music choices. Composers like Hiroshi Miyauchi, Yuzo Koshiro, Tokuhiko Uwabo, Naofumi Hataya, Jun Senoue, Takenobu Mitsuyoshi, and Tomoya Ohtani line both the classic and modern games with music produced for and on a variety of sound hardware which have all helped to shape its respective generation.

Sega's ties with outside composers like Masato Nakamura of J-pop band DREAMS COME TRUE and Michael Jackson of American pop fame further set its devotion to game music in stone. And soundtracks developed by third party composers for third party games further this tradition away from home, with some of the biggest names in both Japanese and American game music history contributing to every generation of Sega's video game hardware lineup.

This category has the following 6 subcategories, out of 6 total.

The following 11 pages are in this category, out of 11 total.