Panzer Dragoon (パンツァードラグーン) is a 3D rail shooter developed by Team Andromeda in 1995. It was originally released for the Sega Saturn, becoming one of the flagship titles of the console, and one of the few games available at launch in North America and Europe.

Panzer Dragoon follows the story of Keil Fluge (unnamed in western versions), a member of a hunter party who encounters a fight between two dragons, the Solo Wing (in blue) and the Dark Dragon (in black). The rider of the Solo Wing is mortally wounded in the battle and entrusts his mission, as well as his dragon, to Keil. Keil must stop the Dark Dragon from reactivating an ancient ruin and wreaking havoc on the world.

The game is a rail shooter where the player controls a flying dragon and its rider. The player is given full 360-degree view of the game world and the ability to fire at surrounding enemies. The player moves the aiming reticle around the screen with the D-pad. The dragon follows its movement, allowing the player to dodge obstacles and enemy fire, but because the game is on rails, the overall direction of travel is predetermined. By default, the vertical controls are inverted, but this can be changed in the options before starting a game. Enemies come from all directions and can be tracked by the player using an on-screen radar. The player can pan the field of view by moving the reticle with

or can rotate the view 90 degrees at a time with

. The player can also adjust the distance of the camera from the dragon with

for a medium-distance view,

for a close view, and

for a far view.

Two weapons are available: the rider's handgun, which can be fired by pressing

, and the homing laser fired by the dragon, which can lock on up to eight enemies by holding

while moving the reticle over them. The lock-on laser is useful for handling multiple targets from a distance, while quicker shots can be more effective against closer targets or bosses.

The dragon's health is indicated by a bar in the corner of the screen. It takes damage from enemies and from obstacles. There are no healing items, but the dragon has its health restored at the beginning of each stage. The game ends if the dragon runs out of health, but it can be continued from the beginning of the current stage as long as the player has credits remaining. At the end of each stage, the player is given an accuracy rating depending on the number of enemies shot down; the player is awarded an extra credit for completing a stage with high accuracy.

The game has three difficulty levels (Easy, Normal, and Hard), but the Easy difficulty can only be played up to the fourth stage. The Normal and Hard difficulties have different endings.

Development on Panzer Dragoon dates back to early 1994, when Yukio Futatsugi, Manabu Kusunoki and various other Sega staff were brought together to form Team Andromeda. Tasked with producing a shooter for Sega's upcoming console, project development would last for the best part of a year, and would involve a team of roughly fifteen people.

Panzer Dragoon was envisioned as an "arcade-style" shooter from an early stage, in part due to the fact that many members of Team Andromeda had migrated from Sega's arcade divisions. Core members of the team were also anxious to move into 3D, having previously been restricted to two dimensions in their earlier arcade projects. The game was influenced by the likes of StarBlade, Star Fox and RayForce, as well as Sega's own Space Harrier.

It was customary for 3D shooters of the time for the player to ride a 3D object such as a jet fighter or a tank. Panzer Dragoon's developers however decided it would be more original for the player to ride an armored dragon - a living creature which could also allow for richer animations. During development the game was casually known as "armored dragon" (kiko-ryu in japanese), although Futatsugi, feeling that this name was too bland, decided to translate it to German (a practise continued with the sequel, Panzer Dragoon Zwei).

With this basic concept in mind, the creators were given three months to define a visual identity and a setting for their game, prior to writing code and creating physical assets. A decision was made to set the adventure in a post-apocalyptic science fantasy world, complete with ruins and relics of a fallen civilisation and mankind struggling for survival, something frequently found in Japanese anime at that time. Futatsugi was particularly influenced by one of his childhood readings, The Long Afternoon of Earth a science-fiction novel by Brian Aldiss, in which one side of the earth became perpetually hot, the other perpetually cold.

The first presentation video of Panzer Dragoon featured a green dragon, in-line with traditional European/medieval depictions of the creature, however the team quickly decided make it "more sci-fi", again in an attempt to make the product more original. The dragon was made blue and covered in a white, bone-like armor - ancient flying technology originating from the ancient times, which is also depicted in the scenery. The the mix of natural and technological elements in the game's world, was chosen in order to set it appart from classic science-fiction 3D games of the time. It was largely designed by Manabu Kusunoki, inspired by Japanese anime and manga. The art direction was later pushed towards a Turkish/Ottoman style to avoid the strict European aesthetics of the early presentation video.

One of Panzer Dragoon's major artistic influences was Arzach, a comic book series created by French artist Jean Giraud, known by his alias Moebius. Moebius would contribute in the creative process of the game with original artwork (just as the Japanese/South Korean cover art). Hayao Miyazaki's Nausicaa of the Valley of the Wind, and David Lynch's Dune movie were also key inspirations. Kusunoki was adamant to not include giant robots such as those seen in the then-popular Gundam anime, and he avoided unrealistic character designs such as those seen in the Final Fantasy series of RPGs. Kentaro Yoshida, texturing and modelling artist of Panzer Dragoon, described the creation process as similar in style to Star Wars, in that it "made an unearthly world appear so real". Takashi Iwade, who produced the opening cutscene and character models, claimed to be inspired by antique clocks and similar industrialised products from the era, myriapods, marine mollusks and ammonite. The battleship was inspired by a rusty fishing boat.

The Sega Saturn's hardware was new to Team Andromeda, and given that Yukio Futatsugi was still new to the company, Panzer Dragoon was kept relatively simple in design. Though Futatsugi had a clear vision of what he wanted (keeping the style of the game pure). cutscenes are minimal, and enemies were created out of simple shapes, making them both easy to understand visually, and more suited to the Saturn's hardware (and likewise, levels are also relatively simplistic and barren). A surprising amount nevertheless went into an elaborate back story for the game, with Futatsugi, going so far as to create a new language for the game, mixing elements of of Ancient Greek, Latin and Russian. This choice was allegedly inspired by the anime The Wings of Honneamise which did something similar, and of which team members were fans of.

Working on new hardware proved difficult for the young team, forcing the game to miss its initial deadline given by Sega (the Japanese system launch, i.e. November 1994). This was partly due to the fact the Saturn's hardware was not finalised when production began, meaning the team lacked a useful Saturn prototype to test their progress (programmers were in fact forced to work with hypotheticals, "guessing" what the features of the system would be). Team Andromeda also created its own graphics library and mapping tools instead of using Sega's in an attempt to make the most of the new system. The game's graphics and cutscenes were produced with Softimage, and the 3D elements were programmed on SGI workstations using OpenGL.

The programmers were eventually able to transition to the debug Saturn they had received, but the process proved difficult, with the game suffering from very low frame rates (in the end, the team made do with 20FPS in some sections, much lower than the 60s and even 30s common in games today). The first two levels produced (a desert for level 2 and a forest for level 5), lacked features aside from sand and forest effects because they were uncertain how far the hardware could be pushed. Keeping CPU limitations in mind, simple tornado effects were added to level 2, to liven things up.

Work on the soundtrack began after the rest of game was complete (similar to the audio strategy seen in big budget films). The music was designed to specifically reflect each level art-style and events, the "on rail" progression system proving beneficial as the developers would know exactly where the player would be at any given time. The soundtrack was outsourced to Yoshitaka Azuma, who was composing musics for NHK TV programs at that time. It is a mix between orchestral and synthesizer tracks, and was assisted by gameplay videos, allowing for specifically timed pieces which match the player's progression in each level.

Panzer Dragoon was an unexpected success for Sega, particularly in western regions. Though the game had been mentioned briefly by the video game press of the era, the game drew an unusual amount of attention after Sega's shock decision to bring the Sega Saturn's launch date four months forward. Being one of only five launch titles in North America (with a subsequent early release on Europe), Panzer Dragoon was one of the few fully 3D video games available for the console, and the first not to be an arcade port.

Following its release on the Sega Saturn, Panzer Dragoon was ported to Windows PCs in 1997. This version would find itself included as a bonus in the later game, Panzer Dragoon Orta for the Xbox.

Panzer Dragoon was followed by Panzer Dragoon Zwei, which despite its name is actually a prequel to this game, chronologically. Its existence has also been recognised in Sonic & All-Stars Racing Transformed.

Following its Saturn release, Panzer Dragoon was ported to Windows PCs in early 1996. This initial version, similar to Virtua Fighter PC, was optimised specifically for the NV1 graphics chipset and bundled exclusively with EDGE 3D video cards by Diamond Multimedia[14]. The NV1 release was designed specifically for the NV1 specification and thus will not function with any other graphics cards without help. It is also unknown if this version was ever released outside of North America.

Later in the year, a software rendered version was released, which requires at least a Pentium-class processor to run. The game's contents are thought to be the same, however.

While the PC version is able to output a higher resolution image, the lighting differs from the base game, frame rates can be inconsistent (particularly between level transitions) and some full motion video clips have been removed.

The Saturn version of Panzer Dragoon makes (limited) use of "fogging" to attempt to hide 3D geometry pop-in caused by short draw distances. In the PC port, draw distances are the same, but the fogging effect is removed. True semi-transparency is used for some effects in the PC version, as opposed to the checkerboard mesh patterns used to simulate alpha transparency on the Saturn. 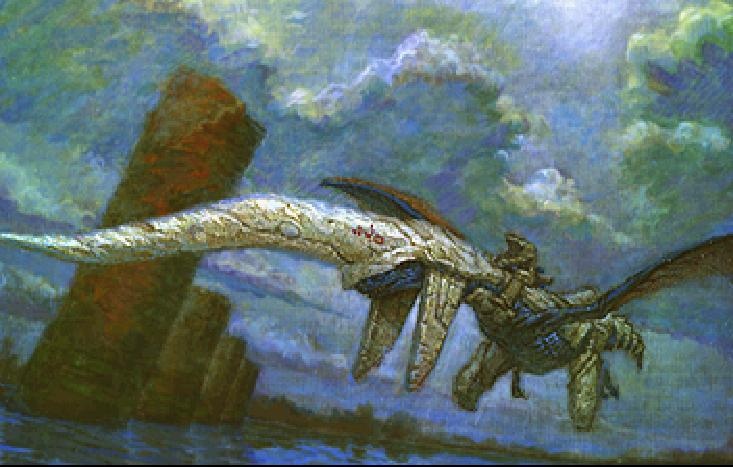