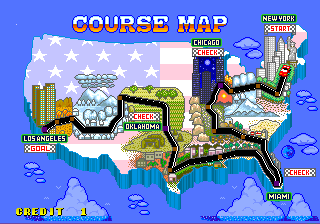 Turbo OutRun has the player make a journey across the United States of America, from New York to Los Angeles. It is a more linear game than its predecessor, offering no forks in the road and therefore less of an incentive to play the game again after completion.

For the most part, the game is very similar to its predecessor, save for new graphics and music. Turbo OutRun offers several new features however, such as weather effects and obstacles which can slow your journey down. Like its predecessor, the player drives a car which looks suspiciously like Ferrari, however rather than being based on a Ferrari Testarossa, it is a Ferrari F40 (although like its predecessor, Turbo OutRun's car is fictional convertible version of the car, which Ferrari did not manufacture). You are also set against a rival opponent, driving what appears to be a white Porsche 959 (a nod towards the rivalry between Ferrari and Porsche at that time).

The game is divided into four "sub-goals". Upon reaching a goal, the player is able to upgrade their car. If the opponent gets to the goal first, the player's girlfriend will sit in the opponent car in the next race, however if the player gets there first, a 1,000,000 point bonus is given.

The other major addition to Turbo OutRun is the inclusion of a "Turbo" feature: the back of the car has a rocket-type exhaust on the back and the player is given a "boost" button, which allows the car to travel faster. If the boost is left on for too long however, the car will overheat, and will be punished with slowdown. It is also the first OutRun game to offer an automatic transmission option.

After each goal, the player is taken to a shop where they can apply one of three upgrades to their car: a better engine, high-grip tires, or a better turbo. Each upgrade may be applied only once, and since there are four sections, the player will eventually have a maxed-out car.

The arcade version also allows you to continue from the beginning of the stage if you lose, a feature that did not survive into later OutRun games.

There are four stage songs: "Rush a Difficulty", "Keep Your Heart", "Shake the Street", and "Who Are You". Unlike in other OutRun games, the player cannot choose the song currently playing — they are tied to each section. Additionally, every version of the game appears to use a different song order, and the Sega Mega Drive port changes the song titles ("Insanity", "Highway", "Main Theme", and "Funky run", respectively, in addition to having its own songs).

Though very different to the rest of the series, Turbo OutRun is arguably closer to Yu Suzuki's vision for the original OutRun, being set in the United States of America and featuring various scrapped ideas such as a checkpoint system.

Like OutRun Ferrari were not consulted during the development of this game, although the Ferrari brand is used on Turbo OutRun arcade cabinets.

Turbo OutRun was released as both a stand-alone arcade cabinet and as an upgrade kit to the original OutRun. The upgrade kits offer very minor aesthetic changes - a different marquee and extra "Turbo" stickers. Some Turbo OutRun cabinets were converted back into regular OutRun machines as the prior game proved more popular - Turbo OutRun cabinets can be identified by the use of Ferrari branding.

The game was ported to the Sega Mega Drive in 1992 exclusively in Japan and Europe, and was brought to the Amiga, Amstrad CPC, Atari ST, Commodore 64, DOS computers and ZX Spectrum too. Each of these ports suffer from cutbacks as sprite scaling is not supported by these systems.