OutRun 2019 (アウトラン 2019) is a Sega Mega Drive driving game developed by Hertz. A futuristic entry in the OutRun series featuring science-fiction elements and courses, it was first published in Japan by SIMS in March 1993[1], and was brought to the United States and Europe the following month by Sega. A notable departure from previous games in the series in both tone and gameplay, OutRun 2019 received lukewarm reception by contemporary critics, but has since seen a slight critical re-evaluation as an experimental and passionate take on Sega's popular driving franchise.

OutRun 2019 is a driving game that plays similarly to the original OutRun but with a futuristic setting and various additions such as jumps, bridges, and tunnels. The game is a race against a time limit in a rocket-boosted car across four different stages around the world. The player gains more time at each checkpoint. Like the original OutRun, there is a fork in the road before each checkpoint. The player can choose between two different routes, each in a different exotic locale. There can also be multiple paths within a single route. Most routes split into two routes at their ends, but a few routes instead end with either a goal or a convergence with another route. Some routes contain elevated roads that can be accessed by jumping off a ramp.

The car is steered with

. If the player chooses the manual transmission option, the car shifts between low and high gear with

. The car starts in low gear at the beginning of the race or after crashing. The game uses a boosting mechanic similar to Turbo OutRun. A power gauge in the car's HUD increases as the car gains speed. When the rainbow-colored band is full, a white band begins to fill over it. When the white band is full, the car's rocket engages and the car launches into a high-speed boost. The car's booster rocket is useful for accelerating through straightaways but cannot negotiate narrower turns. The white band does not fill when the car is in low gear when using the manual transmission. Tapping the brake or letting off the accelerator clears the white band and ends the boost if engaged.

Other cars appear on the road but are merely obstacles and not competitors. Hitting an obstacle at high speed or flying into water or a pit crashes the car, but it reappears on the road after a moment, costing the player only time. Off-road terrain causes the car to decelerate. The player is retired from the race if time runs out.

All four stages are available to select from the start of the game. The ending unlocks after completing the fourth stage, regardless of which other stages have been completed.

OutRun 2019 was initially just an OutRun-like game for the Mega-CD under the working title of Cyber Road. It was soon moved to the Mega Drive and renamed Junker's High (also known as Junker Spy), until SIMS were granted the rights to use the OutRun brand. The change of name came quite late - advertising for Junker's High was already being printed in Japan prior to the switch.

A near-final prototype ROM of Junker's High has since leaked on the internet, showing that Hertz/SIMS had planned on including save memory in the game to store replays and high scores over time. Saving was removed in the final version of OutRun 2019, perhaps for budgeting purposes. 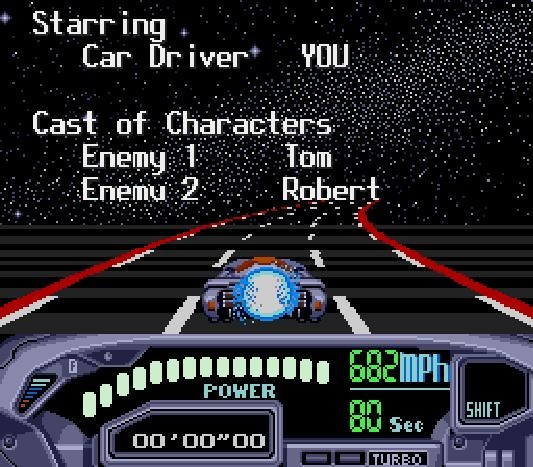