Atomic Runner, known in Japan as Atomic Runner Chelnov (チェルノブ), is a Sega Mega Drive action platform game developed and published by Data East. The game is a port of the company's 1988 arcade game Atomic Runner Chelnov but with significantly enhanced graphics and sound. It was first released in Japan, the United States, and Europe in late 1992, and has since been ported to the Nintendo Wii's Virtual Console courtesy of developer M2 in September 2007.

While the original arcade version's plot took significant inspiration from the 1986 Chernobyl disaster, the home port's story was changed due to the minor controversy it caused in the contemporary Japanese game industry. Instead of a coal miner who developed superhuman abilities after getting caught in a Soviet nuclear failure who must fight an evil organization who wants to hire him for his advanced abilities, Chelnov is now a scientist living happily with his father and sister Chelmi. One night, he goes out for a jog only to hear an explosion at his house. Racing back home, he finds his father near-death at the hands of the "Deathtarians," a group claiming to be the original intelligent life — and consequently, the true owners — of planet Earth, predating humans.

The game is a forced side-scrolling action platformer. The screen continually scrolls to the left at a constant speed except during boss fights. Chelnov continues to run with the screen even if the player is not pressing forward. The player can run ahead faster with

, though Chelnov starts moving again if he touches the edge of the screen. He also stops moving when he crouches with

. He shoots his weapon with

, which has rapid-fire when the button is held down. Shots can be aimed with the D-pad; Chelnov can shoot at diagonal angles but not straight up. He can fire while jumping and while somersaulting. He can also attack enemies by jumping on them, which can be used to bounce off enemies to traverse gaps in the terrain. Chelnov changes the direction he is facing with

, which lets him shoot enemies behind him but does not change his direction of travel.

There are two alternative control schemes. The first scheme shoots with

, and changes direction with

. It is not necessary to hold a direction to turn around since it toggles between forwards and backwards. The second scheme jumps with

, and shoots right with

Chelnov is initially equipped with a laser gun, but he can equip different weapons by finding items. He can upgrade his jump and his attack range, power, and speed by collecting power-ups as well. Chelnov dies with one hit. Touching enemies in any way besides jumping on top of them counts as a hit against Chelnov. He loses his upgrades and reverts to the laser gun upon death. He revives at certain checkpoints within the stages if the player has lives remaining. If the player runs out of lives, the game ends but can be continued. The player can set the starting lives and continues in the options before starting the game. Extra lives are rewarded at certain point thresholds.

Thanks to everyone at Sapporo Satellite 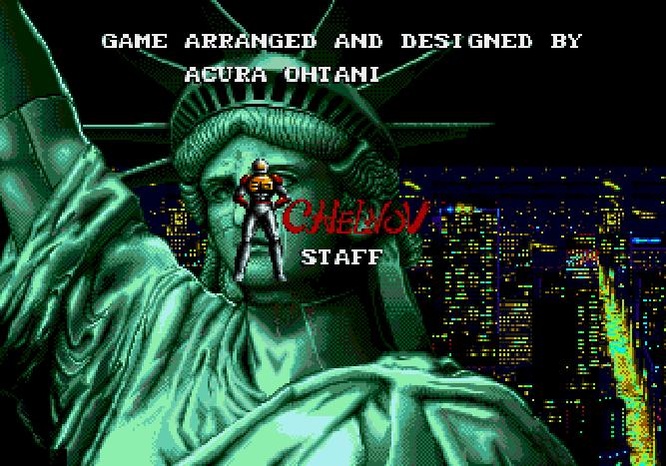