While not the first cartridge-based system to be produced, the 2600 is generally credited as being the first successful home video game console (with removable media, as opposed to the multitude of Pong consoles produced across the 1970s). This is particularly in North America, where it played a substantial role in the video game boom of late 1970s and early 1980s. 40 million dedicated 2600 consoles are believed to have been sold in total. 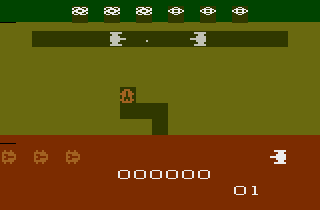 Thunderground, loosely based on the VIC Dual game Borderline was an Atari 2600 exclusive developed by Sega.

The 2600 is a primitive machine, said to be designed for little more than Pong, but despite its blocky graphics and limited sound, it was by far the most popular choice of home console in North America during its prime.

Initially Sega chose to work with third-party publishers, with Parker Brothers picking up the license to produce cartridge versions of Frogger, and Coleco bringing Carnival and Zaxxon to the machine in 1982. Sega entered the market themselves in 1983, with its subisdiary Sega Electronics converting several of its arcade games to the system.

However, it was at this point in history where America experienced its infamous video game crash. Faced with an oversaturated market of sub-par video games, consumers and retailers abandoned the video game industry en masse, with Sega's US operation being one of hundreds of companies to be caught up in a dramatically shrinking marketplace. While the 2600 was never completely discontinued during most of the 1980s, no Sega games were brought to the console after 1984.

A small handful of Atari 2600 games would be released outside of North America, though by 1983/1984 Europe and Austrilasia were more invested in more capable 8-bit home computers. No Atari 2600 Sega games are thought to have been released in Japan.