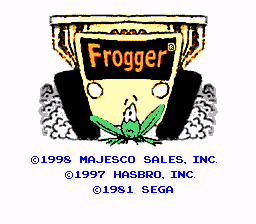 Frogger (フロッガー) is a video game originally developed by Konami and released in 1981. It runs on Namco's Galaxian hardware, and was a huge success for the company during the early 1980s. It was also a huge success for Sega, who picked up publishing and distribution rights for the game in all territories.[8]

The basic idea of the game is to move the frog across the road avoiding cars, then across the river making sure not to fall off platforms to get to one of five destinations. Once Frogger has got to all five destinations, the difficulty increases, often by making the game move faster, reducing the amount of time or adding new obstacles.

Sega distributed three different arcade versions of Frogger, one of which ran on the modified version of the Galaxian hardware used by Nichibutsu's Moon Cresta.

Between 1982 and 1984, Frogger was brought to almost every home console and computer on general sale in North America, with every port licensed by Sega. The legal status surrounding these versions today is unknown - Konami took back the license from Sega in the mid-1990s and has subsequently produced many games under the Frogger brand - most, if not all Frogger games released in the 1980s (other than those Konami handled themselves, such as the MSX version) have been ignored.

ROM cartridge rights were picked up by Parker Brothers, who subsequently brought the game to all major consoles - the Atari 2600, Atari 5200, ColecoVision, Intellivision, Odyssey² and TI-99/4A, as well as some computers, including Atari's range of 8-bit home computers, the Commodore 64 and the VIC-20. Some versions also made it to Europe and Brazil.

Magnetic media rights were held by Sierra On-Line who distributed many of its versions under the short-lived SierraVision brand (with the title The Official Frogger). Sierra released its copies of the game at around the same period as Parker Brothers, with copies available for the Apple II, IBM PC, Macintosh, TRS-80 and TRS-80 CoCo computers. Curiously Sierra also released Atari 8-bit and Commodore 64 versions (on disk/cassette) which differ from Parker Brothers' efforts. Perhaps most notably is Sierra's Atari 2600 version, built to take advantage of the relatively obscure cassette-based Supercharger peripheral by Starpath - it is one of only twelve games officially released in this format.

Unofficial versions of Frogger exist for the BBC Micro and ZX Spectrum, though neither were officially licensed by Sega. Strangely an official copy did make it to the Dragon 32, however, in which Microdeal converted the TRS-80 version to that system. Multiple LCD and VFD versions of the game from the 1980s were also licensed by Sega (although more modern variants are licensed by Konami).

Sega never brought Frogger to any of its own consoles, however did give Parker Brothers the rights to produce a sequel, Frogger II: ThreeDeep!.

Following Konami's buy-back of the rights to Frogger, a licensing deal was struck with Hasbro Interactive, who in turn licensed out the franchise to Majesco Sales for various home console versions. This led to a North American release of Frogger on the Sega Mega Drive in 1998 - the last Sega Mega Drive game to be released in in the region (and was a North American exclusive). Coincidentally Frogger was also the last SNES game to be released in that region, and marked the first opportunity for a Frogger game to be released on a Nintendo console. Both the Mega Drive and SNES copies of the game recycle box art from Frogger 3D, a three-dimensional sequel released a year earlier.

The Mega Drive version still holds the Sega copyright instead of a Konami copyright. It is unfortunately, however, a straight arcade port, with no enhanced graphics or sound, bar a new title screen. According to the programmer, he built the port by reverse-engineering the arcade version ROMs and comparing to an emulator (presumably MAME), using Genecyst to develop and test.

Plans for a Sega Game Gear version of Frogger were also put in place and was once set for release in the United Kingdom in November 1991[9][10], but the port was ultimately scrapped - it is rumoured that licensing issues caused this, though a working prototype of the game has since been found.

The IBM PC version was built specifically for the IBM PC 5150 model of 1981, and only functions correctly when played with a real CGA graphics card. Faster CPUs cause the game to run too fast, however the timing also affects the way the water is drawn.

By presumably exploiting quirks in the original CGA standard, Frogger attempts to switch "background" colours while drawing the frame - if the timing isn't completely correct, the colour will change either too early or too late. On more modern systems (for example, those using VGA cards which can emulate CGA to some degree), this colour switching does not occur, so the water is always appears the same colour as the road. Users can, however, cycle through colour palettes using the F6 key, presumably to optimise the visuals for monochrome monitors.

In addition, the IBM PC version is unstable, being prone to crashing when the player loses, or when settings are changed. Pausing the game (by pressing the pause key) stops the game from moving, however when returning (by pressing any other key), the timer will catch up, meaning instant death for anyone who has paused for more than thirty seconds.

The timer depletes at the same rate regardless of how fast the system is. Therefore, computers within a certain speed range (i.e. faster than a stock Intel 8086 but perhaps slower than a 386 or 486 so that the game remains playable), should be able to achieve higher scores than the original 5150 IBM PC models.