The Commodore 64 is an 8-bit home microcomputer created by Commodore Business Machines in 1982. While not distinctly marketed as such, it is a successor to the VIC-20, and is named after the 64kB of RAM equipped on the system.

The C64 is one of the most popular computers of all time, seeing success across North America and Europe, as well as dozens of smaller markets, meaning for most of the 1980s it was the best selling microcomputer across the world. Much of its success is due to Commodore purchasing MOS Technology and producing as many components as possible in-house, sparking off a price war in the US and pushing many of its competitors out of the market. In Europe it became marketed as a low cost games machine, competing against machines such as ZX Spectrum and Amstrad CPC.

At least 12.5 million Commodore 64s are believed to have been sold worldwide, though the true number is not known. The system was officially discontinued in April 1994.

A team led by Yash Terakura at Commodore Japan developed the Commodore MAX Machine, a video game console and computer hybrid, for the Japanese market.[1] It later becomes the basis for the Commodore 64 computer.

The Commodore 64, a computer based on Commodore Japan's MAX Machine console/computer hybrid, was unveiled at the Consumer Electronics Show (CES) in Las Vegas, in 1982. It was developed by a team that included Yash Terakura[2] and Shiraz Shivji.[3] 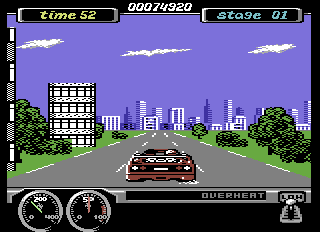 The Commodore 64 version of Turbo OutRun has an award winning soundtrack by Jeroen Tel.

Like all home computers prior the rise of IBM PC compatibles running Windows 95 (and excluding the Sega-designed SC-3000), Sega did not bring any of its games to the Commodore 64 directly, instead licensing out arcade properties to the likes of Activision (Mediagenic) and U.S. Gold, which would in turn sub-license development work to smaller studios. Healthy consumer bases on both sides of the Atlantic meant the system was supported by Sega releases between 1983 and 1992, though not all games were released in both regions.

While the graphics capabilities of the C64 were notable for its day, the system is primarily known for its custom sound chip - the SID (Sound Interface Device for audio). Compared to the 128k ZX Spectrum and Amstrad CPC (and the 16-bit Atari ST) which used the simpler AY-3-8910 chip by General Instrument, the SID was considered a more capable chip and helped further the reputation of Commodore's machine.