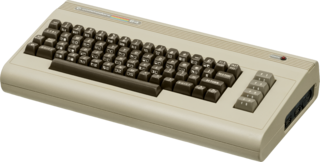 The Commodore 64 is an 8-bit home microcomputer created by Commodore Business Machines in 1982. While not distinctly marketed as such, it is a successor to the VIC-20, and is named after the 64kB of RAM equipped on the system.

The C64 is one of the most popular computers of all time, seeing success across North America and Europe, as well as dozens of smaller markets, meaning for most of the 1980s it was the best selling microcomputer across the world. Much of its success is due to Commodore purchasing MOS Technology and producing as many components as possible in-house, sparking off a price war in the US and pushing many of its competitors out of the market. In Europe it became marketed as a low cost games machine, competing against machines such as ZX Spectrum and Amstrad CPC.

At least 12.5 million Commodore 64s are believed to have been sold worldwide, though the true number is not known. The system was officially discontinued in April 1994.

The following 54 pages are in this category, out of 54 total.