Pengo (ペンゴ) is an arcade game developed by Sega and Coreland and published by Sega. It stars Pengo the penguin who must navigate a maze and defeat all the enemy "Sno-Bees" by pushing blocks of ice. It was released in 1982 and was a reasonable success. 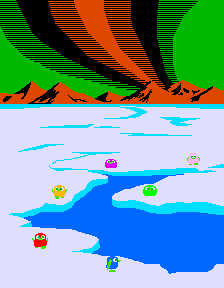 In Pengo, the main objective of the game is to eliminate all the Sno-Bees on-screen in the shortest time possible. Comparisons can be drawn with Hudson Soft's Bomberman franchise, though rather than laying bombs, Pengo must push blocks.

Every block in the level can be pushed in one of four directions, provided there is space for the block to move. If an "ice block" is aligned next to another block, Pengo will smash it. Pushing a block will cause it to slide across the screen until it hits a solid obstacle (i.e. a wall or another block).

In each stage, three "diamond blocks" exist, which cannot be destroyed. If the player can line them up in a row (or column) of three, a bonus is awarded.

Pengo is joined by a number of Sno-Bees, who typically wander around the stage acting as a hazard. If Pengo touches a Sno-Bee, a life is lost, but if a sliding block collides with a Sno-Bee, the Sno-Bee will be killed. More points are awarded for killing two or more Sno-Bees with the same block. Sno-Bees can also be hit by Pengo when "stunned", caused by "wobbling" the edge of the stage (if a Sno-Bee is positioned on that edge of the screen) or by aligning the three diamond blocks.

Two types of Sno-Bee exist - a normal type, which simply wanders around the stage, following Pengo if it is close, and a more aggressive type, which can destroy ice blocks. Sno-Bee "eggs" can also hatch from beneath ice blocks (which are highlighted at the start of each stage).

Similar to games such as Namco's Dig Dug, if only one enemy is left on screen, it will try and escape by running off to one of the corners.

Crushing a Sno-Bee with an ice block awards the player 400 points. This bonus becomes 1,600 if two are crushed in one push, 3,200 if three and 6,400 if four. Walking over a stunned Sno-Bee awards 100 points. 10,000 points are awarded for aligning the three diamond blocks together if at least one is not touching a wall, but only 5,000 if all are against a wall.

Smashing an ice block will award 30 points, or 500 points if it contains a Sno-Bee egg.

A bonus is awarded upon round completion, depending on time elapsed:

By default, Pengo begins with three lives and a bonus life is awarded at 30,000 points. These values can be changed (anywhere from 2 to 5 lives, and the bonus life can be awarded at 50,000 instead) through DIP switch settings.

Pengo was ported to the Atari 2600, Atari 5200, Atari 8-bit computer line and Sega Game Gear (where it was one of three launch titles for the system in Japan, along with Columns and Super Monaco GP). There were also numerous clones, such as Pengi for the BBC Micro and Acorn Electron. Capcom's Don't Pull (Donburu), a game which features as part of Wonder 3, is based on Pengo. Pengo was also released as part of Sega Ages Memorial Selection Vol.1 for the Sega Saturn.

An enhanced version of Pengo was later released for the Sega Mega Drive in the form of Pepenga Pengo. Papenga Pengo also contains a reproduction of this game to play.

A 2010 version of Pengo was released in 2010 for Sega RingWide arcade hardware, adding 8-player support and a higher screen resolution.

Pengo the Penguin was also found as an unused model in Sonic the Fighters.

In the original release, the main music track in Pengo extremely similar to the 1969 synthpop instrumental Popcorn. This was changed in a revised version (which also draws its maze instantly), and again in the many home ports and conversions. Also included is Beethoven's Symphony No. 9, third movement for the intermission screens.

In the arcade version, the credits screen can be accessed in the attract mode by holding

on both joysticks, holding both action buttons, and pressing  START .