Opened in July 1993,[2] Ikebukuro GiGO was the second GiGO venue after Roppongi GiGO, becoming one of the flagship amusement venues affiliated with Sega. Originally identifying itself with the other GiGO venues as a large, inner-city tourist entertainment venue, the physical branding was subsequently dropped in favour of the generic "Sega" look, also seen across many converted Sega Worlds and Club Segas. Up until its closure, however, the location still officially identified itself as "GiGO".

Many Sega arcade games are thought to have been location tested at the site, with several going so far as to credit the venue's staff in-game. During its time in operation, the building's large exterior model changed décor and colour numerous times - when opened in 1993, the venue originally featured a lighting system and elaborate stylised theming; both were removed in the following years, with it taking on a simpler silver and blue colour scheme. It has since been repainted to become red in the late 1990s, yellow in the mid 2000s, and finally red again in 2013.

Due to a fixed termination of the site's land contract, Sega Ikebukuro GiGO was forced to close permanently in September 2021. A smaller arcade venue in the area opened nearby a few weeks later in October.

Linked together by escalators, Sega Ikebukuro GiGO occupied nine floors of its building in total, making it one of the largest game centres in Japan.[3] True to this status, several of these are devoted to coin-operated amusement machines, however other forms of entertainment and businesses, such as photo booths and restaurants, can also be found within them. 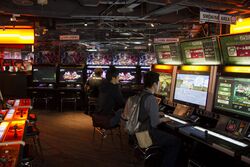 Up to its closing day, its lower floors and two basement levels contained UFO Catcher crane machines, as well as a taiyaki stall and a café.[3] The three floors above featured various video games, including music and fighting games.[3] Its uppermost floors housed purikura cosplay photo booths, with entry only permitted to women or women with men, as well as a staff-only level.[3]

The centre's floors have been repurposed and reorganised several times in its past; medal games originally had a more central role, and like the first GiGO location, Roppongi GiGO, age restricted casino areas and karaoke rooms were also operated at one stage.[2] Its food and drink outlets frequently collaborated with other companies and licenced numerous properties for temporary use.