Mad Bazooka (マッドバズーカ) is a large attraction developed by Sega AM4. Designed as a more traditional interactive bumper car ride attraction for Sega's earlier Amusement Theme Park venues in Japan, it was later exported to appear in the overseas SegaWorld London and Sega World Sydney in 1996 and 1997. Like many early attractions released by the company, no installations remained by the early 2000s, besides a modified version seen at the Japanese Tivoli Park until its closure in 2009. 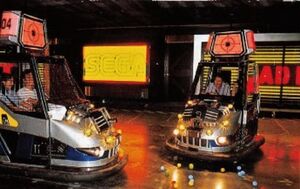 Mad Bazooka is a indoor bumper car ride/target-shooting game designed to last 3.5 minutes long. Players assume control of 10 carts, divided into two teams, in a 352 sq. meter arena. Each two-seater cart interior is equipped with a steering wheel, acceleration pedal, and joystick to control shooting; the stick can be operated by either the driver or a second player.

While traversing the arena, each cart hoovers up colored foam balls littered on the floor, which can be shot – up to 8 per second at speeds of 80 mph - at targets on top of the other cars through fixed gun turrets. Hitting the targets increases the team's score, which can be seen by players on an LED screen inside the vehicle and bystanders on a series of further LED screens on the walls of the arena.

After the game is completed, the winning team is declared, and a variety of statistics (i.e. the number of hits, contribution to the team, rank within the team, etc.) are totalled for each cart and printed out on a scorecard for the player to keep as a souvenir. Although usually played as a team game, Mad Bazooka also includes settings for individual battle and team-switching modes.[2]

Mad Bazooka was first installed at Yokohama Joypolis as one of three debut attractions in July 1994, later going on to appear in four other indoor theme parks opened by Sega. All four locations besides Yokohama Joypolis had Mad Bazooka removed in the late 1990s before their own permanent closures. One of these installations is believed to have been bought and relocated to Kurashiki Tivoli Park in Okayama, where it was partially rethemed under the name of Hell Fighter whilst still retaining its main gameplay features.[3] After Yokohama Joypolis closed in February 2001, the Tivoli version became the only example to remain in operation, staying at the park until its closure in 2009.