After receiving new hardware during the late 2000s, Fish "on" Chips is believed to have closed in February 2015. 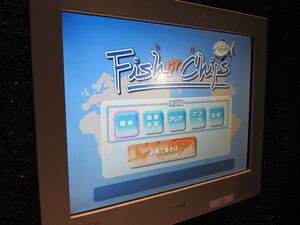 Defined by Sega as an "Underwater Exploration Restaurant", Fish "on" Chips is foremostly a food and drink hospitality venue with interactive multimedia elements. Though also serving other meals, the restaurant's concept is based around five freshwater environments in Asia, Africa, Gifu, North and South America; customers can be served seafood from these places, and can most notably also access, play with, and navigate these environments containing over 40 fish species in real time 3D.[1] Said species in these environments are detailed, making use of behavioural changes depending on season, growth ecology, and educational information. Guests control and feed these these using NAOMI-powered devices built into their tables, utilising a 15-inch touchscreen and two speakers. In addition, numerous other audio sources littered throughout the facility produce an immersive 3D sound effect of a water stream, and three large 200-inch monitors display a constantly-running underwater landscape. These in tandem with Fish "on" Chips' design are intended to create an impression of the venue as an undersea exploration station.[1] 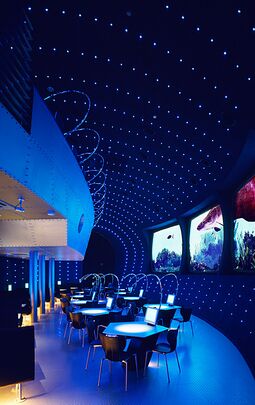 After completing work on Kyoto Joypolis, Sega AM5 facility planner Hiroshi Nakanishi expressed desire in an interview with Sega Magazine to begin work on new projects outside of the Amusement Theme Park concepts, one of which in particular being restaurants.[3] With Sega's theme park business in decline and the prospects of different business ventures, the company sought to reallocate part of its resources to these opportunities. Following successful negotiations with local governing bodies in Gifu prefecture, Sega established Oasis Park Co. Ltd in October 1998, a third-sector company backed by said bodies that would operate an entertainment facility, Oasis Park.[4] AM5, now renamed Mirai R&D in the 1999 restructure, headed development of one of two Sega-created facilities that would be found on its grounds, following Nakanishi's wishes to base a restaurant on technology first seen in the Aquarena attraction from Kyoto Joypolis.[5]

Oasis Park and Fish "on" Chips eventually opened during July 1999, with Sega expecting ¥240,000 sales during its first year.[6][7] The facility achieved 140,000 visitors after 5 months of operations, by which point it had won grand prize in the "Theatre and Exhibition" category of the 1999 Multimedia Grand Prix awards and seen official promotion by Sega.[1] Following this success and enquiries from clients about whether the system used in the restaurant would be accessible from home, Sega decided to commercialise and modify the system a second time for Fish Life, a compact model for consumers.[5] Though met with a muted reception outside of Japan, it would also go on to be the basis for 2001 Mirai R&D projects Touch de Pon! and McDonalds no Touch de Asobo!, successfully bringing the technology back to other restaurants as a part of Sega's new business strategy for the early 2000s.[8]

Fish "on" Chips operated with few notable changes throughout the rest of the 2000s, and eventually gained new hardware for its exploration system. Shortly after the closure of Sega World Oasis Park, Fish "on" Chips appears to have been closed during February 2015 with little notice.[9][10]