Okayama Joypolis (岡山ジョイポリス) was a Joypolis indoor amusement theme park opened by Sega in July 1998. Its attractions and other facilities, including a Sonic Bowl, were later removed during 2008, rendering the centre a large game centre until its closure in September 2018, leaving Tokyo Joypolis as the final Joypolis venue in operation.

The seventh Joypolis venue opened by Sega, Okayama Joypolis opened on 18 July 1998 as a part of the Joyful Town complex ran by Ito-Yokado.[1] Unlike the previous six Joypolis locations, it did not contain any new attractions upon opening, with all of them having previously appeared at other venues in the months beforehand. It is claimed by some sources that Sega originally did not intend to develop a Joypolis location at the site, only doing so at the request of Joyful Town's managers.[3] 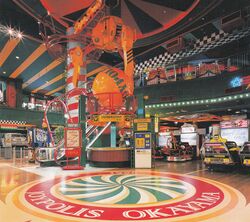 The venue was themed around the concept of "American Amusement Stadium Oldies",[4] containing large amounts of elaborate golden décor. A significant bespoke amount of this was of Sonic the Hedgehog, particularly in the attached Sonic Bowl facility on the third floor.

A Dippin' Dots outlet and Sega Kara rooms were also operated, as well as separate fast-food tenants such as Mos Burger within its outside exterior. It had become one of the three final original Joypolis parks located in Japan alongside the flagship Tokyo Joypolis branch and Umeda Joypolis by September 2002.[5]

Though it still received frequent updates to its line-up of coin-operated arcade machines, Okayama rarely had any new attractions installed after the downscaling of Sega's amusement theme park operations in the early 2000s, only receiving Wild River and 3D Adventure The Ride installations and also seeing a number of removals. By 2008, only these rides, alongside opening day attraction Murder Lodge remained in the venue.

On 23 March 2008, all of the remaining attractions were removed[6], effectively rendering it little more than a large game centre. Its bowling and karaoke facilities were also closed just under four months later on 17 July.[6]

Operations of the venue were transferred to Sega Entertainment upon its formation in October 2012 as a result of its status as a game centre, eventually making it the last Joypolis to be directly managed by Sega after the majority stake acquisition of Sega Live Creation by China Animations Character Co. in 2016. Okayama Joypolis later permanently closed after 20 years of operations in September 2018 due to large-scale redevelopment of its premises, and was demolished shortly afterwards in November.[2]