Sonic Team USA was a division of Sega of America which was formed in 1999. The group came into being after members of the Japanese Sega Software R&D Dept. 8 (trading as Sonic Team), led by Takashi Iizuka, moved to San Francisco to help localise Sonic Adventure for the Western market. 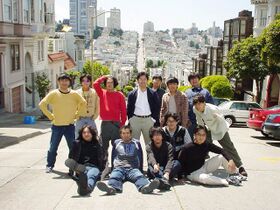 Sonic Team USA existed because Sega's flagship video game franchise, Sonic the Hedgehog typically performs better outside of Japan. By developing games stateside (as was the case with Sonic 2 and Sonic 3), it is easier to tailor Sonic products for Western markets.

Sonic Adventure was developed entirely in Japan, but as there were nine months between its Japanese and North American releases, a decision was made to go back, fix bugs, and change parts of the game based on local feedback. Consequently the Western versions of Sonic Adventure are more stable and polished than the original Japanese release, to the point where the game was re-released in Japan as Sonic Adventure International later in 1999.

Following the localised Sonic Adventure, Iizuka's team chose to remain in the US and take the reigns on the game's sequel, Sonic Adventure 2. For the next few years a relationship would form in which the Japanese Sonic Team and Sonic Team USA would work together, though given both sides were comprised of veteran Japanese Sonic developers, they were usually credited as one entity. Sonic Team producer Yuji Naka would oversee both halves of development and ultimately have the final say.

In 2004 the group changed its name to Sega Studios USA.