For other games with the same name, see Jurassic Park.

Jurassic Park (ジュラシック・パーク) for the Sega Mega Drive is a platform game developed by BlueSky Software and published by Sega in 1993. It is a based on the film of the same name.

In Jurassic Park, the player can play as either Dr. Grant or a Velociraptor, each with varying gameplay objectives. As Dr. Grant,

is for switching weapons and

is for firing the selected weapon. As the Velociraptor,

is for bite attacks and

is for claw attacks. Combining these with directional keys results in a variety of attacks. Both characters jump with the

The final stage of Dr. Grant features a puzzle boss fight that is difficult to understand without having seen the movie.

The game has a lot of slowdown, even in scenes with little to no enemies present, which was not present in the following games released by BlueSky Software. 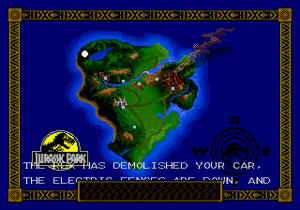 A nod to Disney's Aladdin.

For a while, BlueSky Software were producing two games concurrently - Jurassic Park, which saw the lion's share of the team's attention, and a version of Disney's Aladdin, with both projects sharing some staff. BlueSky's version of Aladdin was inevitably canceled and replaced by a re-worked version by Virgin Games, however a homage to this period can be seen in the North Western part of Jurassic Park's map, where an upside-down genie lamp is disguised as a mountain range.