Risk is a 1994 conversion of the board game Risk produced by Sculptured Software for the Sega Mega Drive.

Risk is a turn-based game for two to six players, either player- or computer-controlled, which works very similarly to the Parker Brothers board game. The standard version is played on a board depicting a stylised Napoleonic-era political map of the Earth, divided into forty-two territories, which are grouped into six continents. Players control armies with which they attempt to capture territories from other players. The primary object of the game is "world domination," or to occupy every territory on the board and in so doing, eliminate all other players.

Using area movement, Risk ignores limitations such as the vast size of the world and the logistics of long campaigns.

There are three difficulties for the computer players to be. Beginner difficulty computers shoot slowly in arcade mode and difficult ones shoot very quickly and with a better range accuracy. They also tend to try and overwhelm an area rather than build up in multiple places.

Risk starts with all of the players selecting countries to occupy. Once they are occupied, the remainder of the initial armies are placed wherever a player sees fit. The number of beginning armies depends on the amount of players:

Players can choose their countries at the beginning manually or have the computer auto-select countries for all players at random. This does generally give a very balanced location for every player; however, they are entirely random and thus all vulnerable. The computer can also place extra armies too. It will again do this seemingly at random.

Start of a Turn 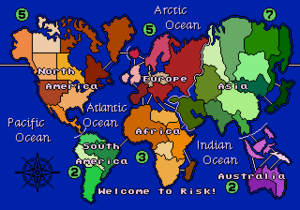 The Risk world map playing board.

Once the initial army placement has been completed, one player will be randomly selected to go first. At the start of a turn, a player will receive new armies for any territories or continents they control. Each turn a player gets a minimum of three armies for controlling at least one country. Beyond that, a player gets one army for every three countries he or she controls. So if a player has twelve countries, he or she will get four armies per turn. However, even if a player has only two countries, they will still get three armies.

Players get extra armies at the start of a turn if they have control of an entire continent. Each continent is worth an amount of armies from two to seven.

In addition to countries and continents, a player may receive armies for trading in cards. A card is gained at the end of any turn in which a player won at least one battle. At the start of a turn, a player may trade in a set of three cards. There are three different designs on the cards, Infantry, Cavalry and Artillery. A player must either trade in three of a kind, or one of each. There are 42 of these cards in all, one representing each country. In addition, there are two wild cards as well, which have all three pictures on them, but do not have a country associated with them.

Players may trade in cards only at the start of a turn, or if they eliminate another player from the game and get too many cards by virtue of defeating them. This only occurs if their card total plus your existing card total brings you to six cards or more, in which a player's hand must be reduced to a minimum of four cards.

When trading in sets of cards, which is done by hitting the

button on the beginning of a turn screen, the player will get extra armies to place just as when for controlling countries and continents. How many cards are traded in and in what combination determines the amount of armies received. When trading in cards, if the player controls any of the countries on a card traded in, they will gain two additional armies on that country. If multiple cards contain pictures of countries controlled, they will only get the armies on one of the territories.

What to do during a turn

During the turn, players aim to attack and conquer other territories on the map. The attacker must have at least two armies to initiate an attack. A country may attack any country which it directly borders. Alaska is claimed to be directly next to Kamchatka so that the west and east sides of the world connect to each other. It is highly recommended that players win one battle per turn, minimum, in order to receive a card on the next turn.

Risk has two main modes for battle: the mode may be changed using the  START  button at any point when viewing the world map during a turn.

Classic mode shows a battle field where pressing a button will fire cannons at the other player. The cannons' chances of hitting are the same chances you would have if you were rolling real dice. This mode is very balanced if players are of great different skill levels. It also takes longer in most large battles. The attacker and defender may each choose how many cannons, or dice, they wish to use. Hitting

at either time will return the players to the battle menu.

Battle options for Classic Mode are: 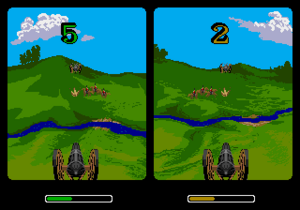 Attacker and Defender Options - Each player selects how many cannons they use. The attacker may use up to three cannons [dice]. This increases the amount of chances the attacker will hit a defender. It also increases the chances the defender will hit the attacker. If an attacker uses more than one cannon, that player is forced to occupy the territory with two or three units [depending on how many cannons survive] at the end of the turn. If the attacker is attacking behind her or his lines, this makes quite a difference.

Arcade mode is an interactive version of attack. Players will each have a cannon in which they control the direction and range of its firing and attempt to kill all of the opponents units as they walk across the field of battle. Hitting a cavalry unit reduces the opponents armies by two; hitting an infantry reduces it by one. The battle starts with a cavalry unit, and then an infantry unit follows it, provided the battle has not ended. After an infantry unit is hit, another cavalry unit will appear. All infantries start from the outside area of the screen, run to an arbitrary point, stand there for a second, and then run back off the screen. Cavalry units run from the outside to the inside and then back off, at a much faster pace and never stopping. An attacker may never have their army reduced below one under any circumstances. However, once reduced to one, the attacker does lose the battle. Computer opponents will have accuracies and firing rates improved depending on their difficulty.

Once a player has made every attack they want, it is either time to end the turn or fortify a position. To fortify, hit the  START  button and select "fortify." This allows players to move any extra armies from one territory to an adjacent one., which is useful for getting otherwise useless back lines armies closer to the front. It does, however, end the turn. Armies may only be moved if at least two are on the territory you select first.