Cadillacs and Dinosaurs: The Second Cataclysm

Cadillacs and Dinosaurs: The Second Cataclysm is a Sega Mega-CD game developed and published by Rocket Science Games in 1994. It is based on the comic book series Xenozoic Tales, and the TV show of the same name. It is not to be confused with the arcade beat-'em-up, Cadillacs and Dinosaurs by Capcom.

The Mega-CD game was only released in North America and Brazil, though BMG Interactive Entertainment had once planned to bring the game to Europe[2]. A Sega Saturn version was also planned for Q4 1995[3].

The game is set in the "Xenozoic Age," which occurs after a disaster in the year 2020 known as the First Cataclysm causes all of Earth's previous inhabitants to share the planet at once. Mankind maintains a balance with nature according to a code called the "Machinato Vitae," taught to them by the mysterious reptilian race called the Grith. The megalomaniacal Governor Sharnhorst, in her quest for profit and power, threatens to disrupt this balance and usher in a Second Cataclysm. Jack Tenrec, a genius mechanic, and Hannah Dundee, a deadeye shot, are two humans who have been chosen by the Grith to preserve the Machinato Vitae and save the balance of life on Earth. They set out in a 1953 Cadillac with machine guns. The story is told through comic book-styled cutscenes in between each stage.

The game is an full-motion video rail shooter. The first six stages are played in the Cadillac; the last three stages are played in a mine cart. Jack drives while Hannah shoots. Both vehicles automatically move through each stage. Jack and Hannah have one hour to prevent the Second Cataclysm. This clock ticks down in real time, but the player's decisions can affect it: killing or wounding wildlife causes it to tick down faster, while preserving their lives or killing poachers slows it down.

The Cadillac steers with

. The player sometimes comes to a fork in the road and must choose a path; the right path leads to the end of the stage, but the wrong path can lead to driving around in circles. The D-Pad also moves a crosshair around for aiming Hannah's fire. She fires with

, which can be held to charge up a more powerful shot. The player must drive around or destroy obstacles to avoid taking damage from them. The Cadillac can do a turbo boost with

, which can be used to launch off obstacles for a jump or to power through mud. In two-player games, where the first player plays as Jack and drives while the second player plays as Hannah and shoots.

The mine cart cannot be steered, since it is on rails. The D-Pad moves the crosshair and

fires a gun, which can be charged by holding

. The mine cart occasionally reaches a junction and must switch tracks by moving the D-Pad to the left or right side of the screen in order to navigate through the maze-like corridors. The mine cart also has a railgun that can be fired with

. The railgun is always fired at the same position and does not need to be aimed; its button can be held down for rapid-fire. The player can reverse the view with

, to switch between facing in front of the mine cart and facing behind it. The mine cart has a compass for showing its direction of travel and a Geiger counter for showing its position relative to a radiation source, both used for navigation. There is also a pressure gauge that shows which color of pipe is safe to shoot without causing an explosion and taking damage. In two-player games, both players have separate crosshairs and shoot.

Both vehicles have a damage meter that increases as they take damage from hazards. The player loses a life when the damage meter is filled. The Cadillac can be repaired by driving over crystals found in some of the stages. Many hazards instantly destroy the vehicle, such as driving into a tree or a pit.

The game saves the player's progress to the Mega-CD's internal memory. During gameplay, the player can invoke the main menu with

+ START  to restart the current level, replay any previously accessed level, or watch the introduction or the credits. There are two difficulty levels, Easy and Hard. 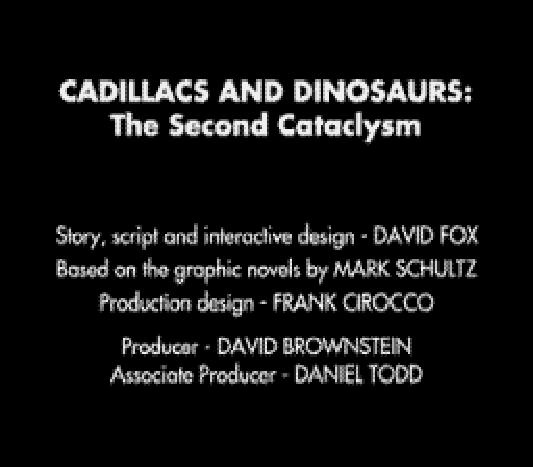 Cadillacs and Dinosaurs: The Second Cataclysm