The game, aimed towards the preschool demographic, has players controlling several different characters from the show's universe, including Thomas, James, Percy, Toby and Duck. Edward, Henry and Gordon also appear in the game mode with Thomas and James. The original Thomas title music is played at the title screen. This game features music from the first three seasons, and all text is spoken by Craig Ewert.

The game has four components that make up gameplay: Game, Race, Explore and a coloring book section. At the start of the game, players are encouraged to enter their names as there engine drivers; there is a list of common names that are also selectable (Steve, Amy, Andy, et al.) for children who may not be able to write their name. From there, the player's engine is picked—choosing any of the outlined characters brings up a coloring book with pictures of each character, while selecting the colored-in Thomas skips this portion. The coloring book portion simply lets players fill in the image with various colors as opposed to any drawing.

Players can select three difficulties: easy, medium and hard, which determine the difficulty of the Game and Race modes in the main game. 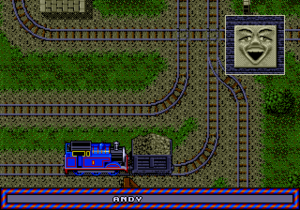 The main Game mode has players fulfilling requests from Sir Topham Hatt to bring various trucks scattered throughout the course to stations—depending on the difficulty set by the player, this could involve one, two or three cars and multiple stations. Players use the control arrows to navigate an engine on the tracks and to switch tracks when the path branches. Bumping into cars couples them to an engine, no matter if it's at the front or back of you. There are various candies and chocolates on the track which may be picked up for points, although points do not affect gameplay. Pressing

will uncouple the trucks from an engine, starting with the outermost car. The

to see the current objective. Hitting  START  allows players to either start that level over or quit.

Cars include Troublesome Trucks (mine and gravel), flat wagons (empty, logs and shape in different colors), Annie and Clarabel (who both look exactly the same).

Once the correct cars have been brought to the station, they will be uncoupled and the mission will end and Sir Topham Hatt will praise the player's memory and/or speed, and the next request will be given. This process repeats in loop, regardless of how many missions there are. 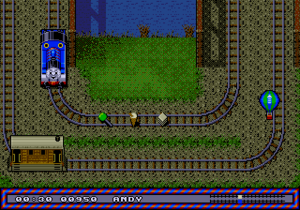 The Explore game is an open-ended world based on that of Game and Race modes. There is no stated objective; rather, players are free to roam around, picking up trucks, passing through stations and looking around the map.