Outback Joey is a Sega Mega Drive fitness action platform game developed by Western Technologies and published by HeartBeat Corporation. Specifically designed to utilize the fitness sensor-integrated Mega Drive peripheral HeartBeat Catalyst[1][2], it was released exclusively in the United States in November 1993 and only available as a pack-in with the either the HeartBeat Catalyst or the HeartBeat Personal Trainer; as the hardware only had a production run of 1,000 units total, it is assumed not many more copies of Outback Joey were produced as well. As such, both are considered some of the rarest pieces of Mega Drive history in existence.[5]

The titular protagonist Joey, a proud kangaroo and champion boxer, lives in the Outback of Northern Australia with his friends, family, and a love interest named Matilda. One day, a poaching expedition led by the evil gourmand Gustave McGullet captures Matilda and some of Joey's other friends, soon to become the blue plate special at McGullet's Greasy Spoon in Tasmania.

To save his friends, Joey must follow the poachers' trail and gather shards of a talisman to present as a tribute to the Indigenous Australian people so that they may guide him from one region to another. Undaunted by the many dangers that lie ahead, Joey sets out on his treacherous mission through the Australian Outback.

Outback Joey is a standard platform game with minor action platform elements. The titular Joey must traverse a series of four levels, and uses his species' developed jumping ability to attack enemies with kicks and avoid obstacles. In certain areas, Joey can acquire boxing gloves and become a boxing kangaroo, making it easier to defeat enemies (as opposed to kicking or avoiding them). To finish levels, Joey must find all four pieces of a talisman and bring them to the end of a level. If the talisman is incomplete, the player must restart the current level from the beginning. Heath lost from enemies and obstacles can be regained by collecting energy drinks. 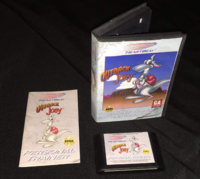 The boxed 1994 re-release of Outback Joey.

Outback Joey is one of the only Sega Mega Drive games which utilize the unique fitness hardware of the HeartBeat Catalyst; the Catalyst features body-mounted fitness sensor hardware which reads the user's heart rate, motion, and skin salinity levels for in-game feedback, which Outback Joey uses to control the running speed of its player character (motivating users to maintain a consistent heart rate by exercising while playing.) Though not a requirement, the Catalyst is intended for use with fitness machines such as treadmills and ellipticals, and the game was generally marketed as being best played with a dedicated exercise bike.

The game, alongside the Catalyst and Personal Trainer, appeared at Winter CES 1994[6][7], and was used to demonstrate how the specialized fitness sensors could be utilized alongside a traditional video game.

In early January 1994, a second revision of Outback Joey was released, likely to fix an unknown critical bug in the original version.[4]