Penn & Teller's Smoke and Mirrors is an unreleased Sega Mega-CD parody video game developed by Imagineering and starring magicians Penn & Teller. Planned for an April 1995 debut, it was virtually finished when Absolute Entertainment went out of business. Unable to find a publisher, the game remained unheard of for nearly two decades until a review copy emerged in 2005.

The game is most well-known for the included minigame Desert Bus, and its associated charity Desert Bus for Hope. 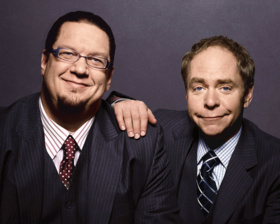 Smoke and Mirrors is a compilation of six “games” intended to either fool your friends or serve a larger parody.

Using the patented Personometer (devised by the Cosmic Research Organization for Clairvoyant Kinetics, or CROCK), Penn and Teller claim to be able to guess the player's astrological sign and their birthday based on a series of responses they give to questions. These questions ask the player to give a response within a range (e.g., "Sunglasses, on one side of the bar—hate them, never wear them. Other side: I'm Lou Reed, I never take them off.") In reality, the owner of the game enters the person's date of birth earlier via a secret menu. The secret menu features an introductory film in which Penn & Teller let their feelings on astrology be known, stating that it is only good for giving astrologists work and allowing people to not take responsibility for their actions. Penn, who is juggling, goes on to work out using the laws of physics and mathematics that Mars has as much gravitational pull on his body as the balls he is juggling.

Originally from Penn and Teller's stage show, Mofo is a gorilla who claims that scientific experiments have given him psychic powers, though in the introductory film Penn and Teller say this is not true. In order to demonstrate his ability, Mofo claims that he can predict whatever card the user has pulled out of a pack of cards based on answers he has given to some questions (e.g., "Do you have any relatives on Venus?"). This trick involves the user either seeing the card the victim has picked, or hearing the victim say the card. When Mofo explains how to "make contact" using the controls, the user secretly enters a code and uses two green bits of mist that appear in Mofo's crystal ball to select both the suit of cards and the value of that card. This trick requires more practice than the others, but there is a practice menu available. Nevertheless, Penn and Teller advise the player if they mess up just to say, "Well bummer, I guess he isn't psychic after all."

Considered by Penn to be the "best part" of the collection, Desert Bus is a simulation minigame and a featured part of Electronic Gaming Monthly‘s preview. The objective of the game is to drive a bus from Tucson, Arizona, to Las Vegas, Nevada, in real time at a maximum speed of 45 mph (72 km/h). The feat requires eight hours of continuous play to complete.[1]

The bus contains no passengers, there is little scenery aside from an occasional rock or bus stop sign, and there is no traffic. The road between Tucson and Las Vegas is completely straight. The bus veers to the right slightly, and thus requires the player's constant attention. If the bus veers off the road it will stall and be towed back to Tucson, also in real time. If the player makes it to Las Vegas, one point is scored. The player has the option to make the return trip to Tucson for another point, a decision which must be made in a few seconds or the game ends. Players may continue to make trips and score points as long as their endurance lasts. Although the landscape never changes, an insect splats on the windshield about five hours through the first trip, and on the return trip the light fades, with differences at dusk, and later a pitch black road where the player is guided only with headlights. The game cannot be paused.

The game was designed to be as inoffensive as possible to prove the point that not all video games were corrupting influences. Penn Jillette commented in his radio show Penn Radio that the overly realistic nature of the game was in response to Janet Reno's comments in support of the moral panic about violent video games at the time. He stated that there would have been a prize for the person or group to get the highest score in the game, substantiated by the various Desert Bus contest materials prepared for the release of the game. Penn said that the prize "was going to be, you got to go on Desert Bus from Tucson to Vegas with showgirls and a live band and just the most partying bus ever. You got to Vegas, we're going to put you up at the Rio, big thing, and then, you know, big shows."

Buzz Bombers is a two-player arcade shooter, where each player controls a Buzz Bomber to kill enemies to earn points. The game includes an introductory story: insectoid aliens have destroyed Earth, but some Earth creatures have managed to get on board their ship and threaten the larvae of the next generation. The queen declares that the Buzz Bombers must eliminate the threat and protect their young.

Like the other "scam" minigames, Player 1 will always have more points and win the level. Player 1 controls various cheating features with simple button combinations. One additional feature is a button combination to change the controller that is "in charge" of the "scam", which is useful if the "mark" gets suspicious and wants to switch controllers.

To finally reveal the prank, the player has to press all three buttons on the controller, which reveals a cut scene that gives the secret away. Penn & Teller claimed this is perfect payback to friends "who come over to your house, eat your food, drink your soda, play your games and always beat you."

Sun Scorcher is a game resembling Space Invaders in which a player controls a spaceship that has to destroy alien invaders and the mothership. The prank in this game makes fun of video disclaimers as well as advertising buzzwords such as "Blast Processing" used during the 16-bit era. The game claims to have "thermographics" which are released by the mothership. A disclaimer (that the player cannot skip past, even though the game is still playable) appears beforehand, and a dramatic voice states that these thermographics make the screen dangerous to touch. The prank involves entering a code before playing, which causes the TV to cut to static after the third time the thermographics appear, suggesting the game has broken the TV. The owner is meant to act as though their hand has been burned. Like the other pranks, there is a practice mode, and Penn & Teller give some hints on how to milk this trick for maximum effect.

Smoke and Mirrors is a mixture of platform, role-playing, and puzzle-solving games. The premise is that magic sensations Stinkbomb and Rot (a Siegfried and Roy parody) claim that magic is real. The player controls both Penn and Teller to expose them as frauds, although there are magicians (such as the first boss, The Great Escapo, who throws straitjackets at the player) all over the city working for them. Penn and Teller have a number of double-team moves. For example, Penn provides a distraction while Teller sneaks up behind the victim on hands and knees so that Penn can push them over. A pack of cards is their most common weapon.

At several moments, the player can call in stunt doubles to perform action scenes. The drawback is that all they can do is punch and kick, so the player eventually has to replace them to pick up any items they pass. Debbie Harry (Penn's girlfriend at the time) and Lou Reed (one of Penn's idols) both appear in the game; every shop the player encounters is either called "Debbie's" or "Harry's". Lou Reed appears in Impossible Mode, killing the duo with a blast of lightning from his eyes. A video of Reed appears commenting, "This is the impossible level, boys. Impossible doesn't mean very difficult. Very difficult is winning the Nobel Prize; impossible is eating the Sun."

Windows PC and 3DO Interactive Multiplayer versions of the game were slated for a late 1995 release, but like the Mega-CD version were ultimately unable to secure a publisher.

GamePro described Penn & Teller's Smoke and Mirrors as an acquired taste with a unique interface that makes it very difficult to categorize. They praised the high variety of games included while at the same time noting their uneven quality: "These two TV and stage stars offer something for almost everyone ... Some of it's incredibly boring; some of it has one-time appeal; some of it's hilarious. It's a lot like life."

On 23 November 2007, comedy group LoadingReadyRun started a marathon session of Desert Bus named Desert Bus for Hope to raise money for the charity Child's Play. The four-man team took turns playing the game continuously, with more hours added as more donations were made. The event was broadcast live via webcam, and garnered attention both from the media and Penn & Teller themselves (who called in, bought the team pizza, and contributed donations of their own.) By the end of the event, Desert Bus for Hope had raised $22,805.