Super Thunder Blade (スーパーサンダーブレード) is a Sega Mega Drive rail shooter developed by Sega R&D 2 and published by Sega. An expanded port of the company's titular 1987 arcade game Thunder Blade, it was first released in Japan on October 29, 1988 as one of the system's two launch titles (alongside Space Harrier II).

While the initial reception was mostly positive, it became mixed in restrospective.

As in its predecessor, the player takes control of an helicopter which is used to attack a group of guerrillas. The helicopter itself uses guns and missiles (

). A distinctive feature that also appears in the arcade game is the use of different viewpoints during the entire game; during normal gameplay and when fighting sub-bosses, the game utilizes a third-person perspective from behind the helicopter, similar to Space Harrier, but the camera changes to a top-down perspective when fighting bosses.

In retrospective, the game was criticized for the choppy framerate and slippery gameplay.

The Mega Drive programmers' solution to the scaling in the overhead stages of Thunder Blade was to simply cut them out completely. Instead, each stage starts off in the over-the-shoulder segment. To make up for this, these stages now have a new mid-boss, similar to the one fought at the end of the arcade version. After defeating this, the helicopter goes into an overhead view, but there's no scaling at all (which makes sense, as players couldn't change altitude in these scenes either.) These play out pretty much the same as the arcade game.

Once again, there are only four stages, with the first, second and fourth being roughly identical to the arcade game, and the third being a brand new level that takes place over the ocean. There's also a new final boss, fought in the overhead perspective. 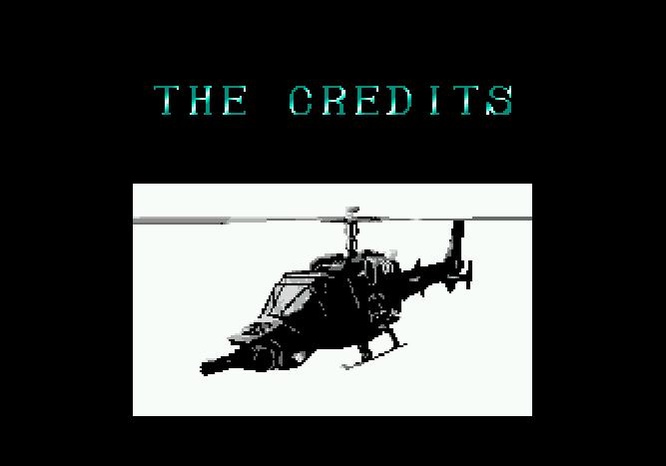