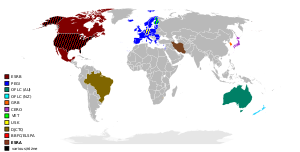 In response to concerns about video games, governments around the globe have enacted or attempted to enact legislation regulating, prohibiting, or outright banning video games. Similarly, support for video game and media regulation has been linked to moral panic. To that end, different game content rating systems have been introduced across the globe.

A video game content rating system is a system used for the classification of video games into suitability-related groups. Most of these systems are associated with and/or sponsored by a government, and are sometimes part of the local motion picture rating system. Video game content rating systems can be used as the basis for laws that cover the sales of video games to minors, such as in Australia. Rating checking and approval is part of the game localization when they are being prepared for their distribution in other countries or locales.

Voluntary rating systems adopted by the video game industry, such as the ESRB rating system in the United States and Canada, as well as the PEGI rating system in Europe, are aimed at informing parents about the types of games their children are playing (or are asking to play). Certain game publishers’ decision to have controversial games rated seems to show that they are not targeted at young children. They are rated by the ESRB as "Mature" (M) or "Adults Only" (AO) in the US, or given BBFC ratings of 15 or 18 in the UK. The packaging notes that these games should not be sold to children. In the US, ESRB ratings are not legally binding, but many retailers take it upon themselves to refuse the sale of these games to minors. In the UK, the BBFC ratings are backed up by law, so it is actually illegal to sell the game to anyone under the indicated age, and many UK retailers go beyond that and also enforce the PEGI ratings, which are not backed up by law. No video game console manufacturer has yet to allow any game to be published in North America with the harshest ESRB rating, "Adults Only", signaling that the game is only appropriate for ages 18 years and up.

The following 17 pages are in this category, out of 17 total.