James "Jamie" Bunker is an American businessman[3] and former Renovation Products game tester and spokesperson[2], most notable for starring in a well-remembered 1991 advertising campaign for the Mega Drive horizontal shoot-'em-up Gaiares.

A San Francisco Bay Area native[1], Bunker joined Renovation Products in 1989, and was one of the company's earliest employees.[2] Employed as a video game tester, he was still attending nearby Fremont High School while working for the company[3], and was only sixteen years old at the time. Although one advertisement claims Bunker was employed as a game tester when he was only twelve[4], the minimum legal working age in California is generally fourteen[5], and Renovation Products was not opened until 1989. While he was possibly serving as an unpaid intern at another company when he was only twelve, the ad is likely instead referring to when Bunker developed a passion for video games in general.

While working for Renovation Products, he was regularly sent by the company to attend various Consumer Electronics Show events[6][2], and while working as a game tester, he formed a relationship with another Renovation employee who still remains "the love of his life."[6]

Bunker remains in the Bay Area[7][8] working in management and customer care positions, and is currently employed at Seagate Technology as Staff Program Manager.[8] 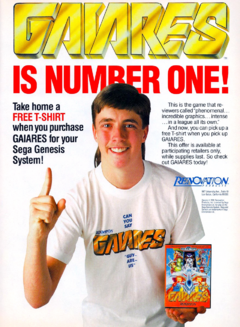 The famous Gaiares advertisement that has become associated with the game's American release.

In 1990, Jamie Bunker was selected by Renovation Products to be the spokesperson for their upcoming Sega Mega Drive game Gaiares[2], with the photoshoots taking place that same year.[7] Bunker posed with the game's United States release in a series of three advertisements, with each labeling the seventeen-year old spokesman a "professional gamer". Contrasting with the often juvenile and exaggerative statements of other game advertisements of the day, Renovation Products' advertisements simply featured Bunker presenting the game with a recommendation of its quality; one even extolled Bunker's credibility as a game tester.

The advertisements' boldness has seen Jamie Bunker inherit a humorous niche of Western gaming culture, with his advertising campaign growing to become celebrated as genuine and even charming by a number of modern critics. Having developed a reputation as one of the Mega Drive era's most fondly-remembered advertising campaigns, Bunker has since seen himself become strongly associated with Gaiares.

In May 2005, Bunker emailed Derrick Sobodash of T2D – The Second Dimension in response to a previous article written on the Gaiares campaign, revealing that he still owns the original prints of the three advertisements.[7]