In Japan, a Medal game (メダルゲーム) is a type of arcade game which uses "medals" (tokens, usually metal coins) as a form of currency. Sega is one of many companies which produces these types of games. 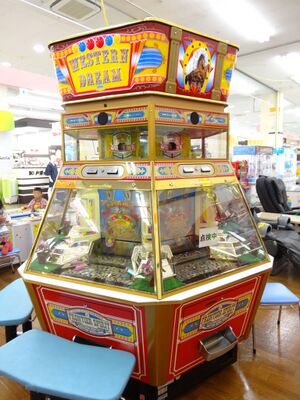 A typical "coin pusher", Western Dream. In Japan these deal exclusively in medals.

Laws in Japan laws forbid any machine from gambling with real currency (i.e. accepting money without the guarantee of a return), regardless of value. The restrictions meant that in the 1950s and 1960s, slot machines (which constituted a big part of Sega's business) could not be sold (legally) in Japan, and while elements of skill were sometimes added to circumvent the laws (for example, 1964's Olympia Star), it was not a business that companies could thrive in.

Around 1974, Sigma introduced a system of "medals" to arcades (or "game centers" as they are typically known in Japan). By minting its own currency, customers could exchange yen for coins which had no cash value, use them in Sigma-operated "medal games" and gamble with what was effectively fake money. Medals could not be converted back to yen, and their distinct size and shape meant they could only be used in game centers.

Sigma's medals shared similar dimensions to the US 5¢ (nickel) piece, and with other companies following Sigma's ideas, an unofficial "standard" was created for medal sizes. However, some companies (including Sega) opted for the slightly larger "25¢" medals, with similar dimensions the the US 25¢ (quarter) piece.

25¢ medals in particular were open to abuse, as their size was initially similar to the ¥10 coin. As it often worked out cheaper to use the real currency over the fake one, the dimensions were tweaked, meaning despite its name, 25¢ medals are no longer the same size as the US quarter. Modern machines perform more checks, ensuring for example that the coins are ferromagnetic. They are also more likely to reject medals from other venues.

Medal games exist in other parts of the world (though most countries opt to use the term "tokens"), though as North America and Europe are less averse to gambling in small amounts, machines are more likely to take real coins. It is also not uncommon to see standard video game arcade machines be equipped to accept tokens rather than real cash.

Sega has been producing medal games since the early 1970s, although production ramped up in 1986 - the year when the industry first boomed in Japan. As these products were produced almost exclusively for a domestic audience, the precise history is not known in the Western world, however by the 1990s Sega was maintaining hundreds of arcade venues and by extension, "medal corners" across Japan.

Sega does not allow customers to directly exchange medals for prizes, however prizes can be won during some medal games.