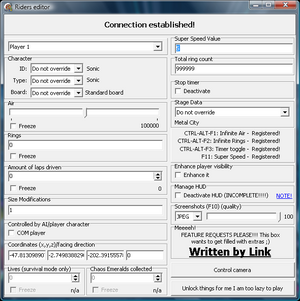 Trainers are programs made to modify behavior of a computer game, usually by modifying addresses and values, in order to allow cheating.

In the 1980s and 1990s, trainers were generally integrated straight into the actual game by cracking groups. When the game was first started, the trainer loaded first, asking the player if he/she wished to cheat. After selecting or not selecting codes the trainer would then proceed to the actual game. There were simpler trainers as well though, such as one for Sonic the Hedgehog which fixed the life counter at 99 lives. In the cracker group release lists and intros, trained games were marked with one or more plus signs after them, one for each option in the trainer, for example: "the Mega Krew presents: Ms. Astro Chicken++". Modern trainers append their titles with a single + and a number, as many have several functions. The number used represents the number of modifications the trainer has available, e.g. 'infinite cash' or 'instant research'. For example: "Final Fantasy VII - Ultima Edition +50 Trainer".