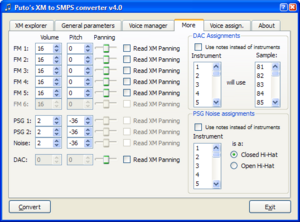 A glance of the GUI

xm4smps is a program created by Puto that converts songs from the XM (eXtended Module) format to the SMPS (Sample Music Playback System) format hence allowing hackers to easily put custom music in their hacks. It runs under Microsoft Windows or Mac OS X and obsoletes nineko's xm3smps. Following a precise planning, it has been released exactly one year after its predecessor (give or take a few hours), as a sort of unofficial legacy.

Created entirely from scratch, xm4smps has an interface similar to xm3smps. Internally, however, xm4smps is completely different from xm3smps. Some of the key differences to note:

Release thread on the forums