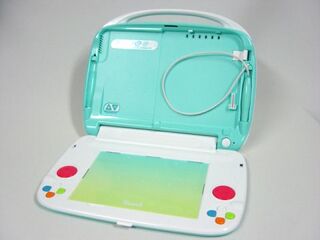 The Advanced Pico Beena (アドバンスピコ・ビーナ), meaning "Be Natural"[1] is a video game console released by Sega Toys in August of 2005 and the successor to the Sega Pico. Similar to its predecessor, the Advanced Pico Beena is aimed at children between the ages of 2 and 8 and stands primarily as an educational device. It has since been streamlined further, and is now commonly referred to simply as the Beena (ビーナ) or BeenaLite (ビーナLite).

Unlike the Sega Pico, the Advanced Pico Beena has not been released outside of Japan, and is maintained entirely by the Sega Toys division of the company (which also took control of the original Pico later in its lifespan). Though the console has not been officially discontinued, no games have been released for the system since July 2011.

The following 3 pages are in this category, out of 3 total.