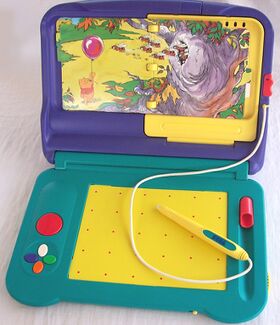 The Sega Pico, known in Japan as the Kids Computer Pico (キッズコンピューター・ピコ) and later the Kids Communication Pico (キッズコミュニケーション・ピコ), is a video game console made by Sega, aimed at young children between the ages of 2 and 8.

The Pico was Sega's first "educational" console, running in parallel with more traditional games consoles aimed at the mass market. Debuting in mid-1993, the Pico was supported in Japan until 2005 when its successor, the Advanced Pico Beena was released. Though relatively obscure in the eyes of many, the Pico stands as one of the most successful devices of its kind, being the first educational console to ship globally and the primary inspiration for devices from LeapFrog or VTech which emerged in the years that followed.

The following 6 pages are in this category, out of 6 total.