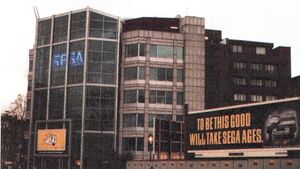 The Amiga CD32, toying with its competition outside of Sega's UK headquarters

As a major force in video games and a symbol of early-90s pop culture, Sega is often referred to in the media. Sometimes Sega has bought into product placement to subliminary advertise their wares, other times it's a reflection of the firm's popularity, and occasionally Sega's presence is accidental.

The following lists known references to Sega across a variety of media: