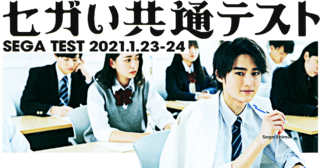 The Sega Test or Sega Ikyoutsuu Test (セガい共通テスト) was a series of three examinations held by Sega over the weekend of the 23rd and 24th of January, 2021, at the website https://segatest.sega.com. The three tests were part of Sega's celebration of its 60th anniversary, and as such covered Sega titles and projects from 1960 all the way to the present day.

All three tests consisted of sixty multiple-choice questions with a 1 hour time limit, and were available in both Japanese and English. They were styled like a Japanese university examination; with a pre-registration process, and with four seminars held by Sega employees from around the world for "revision" before the dates of the tests themselves. Entrants were ranked based on their score, with a weighted marking system giving your "SEGA IQ" - i.e. scoring the same result on two different tests gave a different "SEGA IQ" for each one. Entrants could take as many of the three tests as they wanted, with their score for each being stored.

All entrants were entered into an initial prize draw, with everyone who got a "SEGA IQ" of 60 or higher as their best result getting an additional special medal graphic, with their name and "SEGA IQ" on it. Those with 60 or above were also entered into a second prize draw, for an additional prize, and there was a third prize draw for autographed photos of Sega Shirou. However, only Japanese-based entrants were able to receive the prizes if they won.

The Sega Test was announced on Monday the 30th of November 2020, with the first "Sega Seminar" video uploaded at the same time. Entrants could look around the front page of the site at https://segatest.sega.com and get a feel of what was going to happen (including a brief summary of the test layout and rules), but were not able to pre-register until the 12th of January 2021.

Before the tests were held, Sega uploaded 5 videos to YouTube, or "Sega Seminars", on various topics that showed up as some of the test questions.

Uploaded on the 30th of November 2020, Hiroyuki Miyazaki held a talk in Japanese (with English subtitles) on consumer hardware, focusing on the Planet codenames system used by Sega, entitled "「セガい共通テスト」公式対策オンライン講座「セガゼミ」 第1回 コンシューマ：ハード ミヤヒロ先生 (～This winter, you get to know SEGA more.～)" [1] Also shown in this video was a prototype of the Sega Nomad hardware, labelled up with the system's codename of Venus, that had never been seen before.

Uploaded on the 7th of December 2020, Yosuke Okunari held a talk in Japanese (with English subtitles) on consumer software entitled "「セガい共通テスト」公式対策オンライン講座「セガゼミ」 第2回 コンシューマ：ソフト 奥成先生 (The 2nd Session of SEGA SEMINAR: Consumer Software Lecture by Prof. Okunari)"[2], focusing on Saturn software that had also been given astronomy codenames, this time based on constellations. Most of these were previously unknown.

Uploaded on the 14th of December 2020, Kensaku Nishimura held a talk in Japanese (with English subtitles) on arcade and trading card games entitled "「セガい共通テスト」公式対策オンライン講座「セガゼミ」 第３回 アーケード 西村先生 (The 3rd Session of SEGA SEMINAR: Arcade Games Lecture by Prof. Nishimura.)"[3] This covered WCCF and Mushiking, amongst others.

Unlike the previous three seminars, Seminar 4 consisted of two videos, both uploaded on the 21st of December 2020.

Pre-registration for the tests commenced on the 12th of January 2021, and required you to log into the Sega Test website using either Twitter credentials or Facebook ones. Once this process was completed and authentication granted using the social network chosen, the entrant was shown a confirmation page, and reminded to keep studying until the date of the tests, which were also shown, along with the start times in JST. Also available to show that you'd signed up were Twitter, Facebook, and LINE share buttons.

Each of the three Sega Tests consisted of sixty multiple choice questions, with a 1 hour time limit. Provided you had pre-registered, the entrant logged into the Sega Test website with the same credentials in advance of the test time, and were greeted with a Japanese-university-style exam paper cover page holding screen, with a Javascript button that enable itself at the exact start of the test time. The entrant had to click that button within 5 minutes of the test start time, or they were not allowed access to take the test. While most questions consisted of picking a single choice from the 4 available, some questions required you to pick multiple answers, and some to arrange all 4 answers into a requested order. The first three questions were the same on all three tests, with questions 4 to 60 being unique between all three tests. A Javascript countdown timer in the form of a constantly decreasing blue and black striped bar enforced a limit of 60 seconds per question - when 60 seconds had elapsed, the test moved on to the next question regardless of whether or not the entrant had selected an answer or not. A second, numerical timer, showed the time left for the test in total, and the total number of remaining questions was displayed next to it. At the end of each test the user was congratulated on finishing, told they would learn the results at a later date, and the time of the next test (in JST, regardless of local timezone). There was also an option to share your completion of the test on Twitter, Facebook, or LINE.

Below are the contents of the three English language version tests, as they were written (including grammatical/typographical errors). Some questions had image(s) on the test, some did not. Most were simply picking one choice from the list of four supplied, but some required selecting multiple choices, or arranging the 4 choices into a requested order. All questions also had a "Level" value, of either S, A, C, D, or E: interestingly, there were no Level B questions on any of the three tests.

Also included is the matching data from the results pages Sega released on the 5th of February 2021: these are the answers to each question, a Trivia fact, and image(s) included for any given question (like the test itself, some had image(s) and some did not, but they were different to the ones from the test). Additionally, a notes field is included for further information regarding specific questions.

Some URLs for test pages themselves included:

The results of the Sega Test were released on Friday the 5th of February 2021. Entrants could log in using the same Twitter or Facebook credentials they'd used to take the tests with, and see a personalised answer key for where they'd been correct - or not - for each question on the tests they had personally taken. A trivia fact was also included for every question on each test, and the entrant was given a results certificate with four possible ranks depending on how well they'd done.

There were three different prizes on offer:

If an entrant used Twitter credentials, they would be DM'd if they won, and if they used Facebook, they would be emailed on the email address registered to the account. All three prize sets could only be shipped to Japan.

Following the completion of the third test, Yuji Naka shared an image on Twitter of question 18, a question asking about what Sonic the Hedgehog's name was during development.

What was the name originally given to Sonic the Hedgehog, one of SEGA's main mascots, before he was introduced to the world?

A brief conversation then took place between Naka-san, Yosuke Okunari (who was heavily involved with the test creation to the point of being one of the Sega Seminar hosts), Mayumi Moro, and a bilingual English/Japanese fan by the name of A.M.

The gist of the whole discussion seems to boil down to a simple mistranslation: someone at 1-Up in 2004 while writing an article saw the name "Mr Hedgehog" written down in Japanese on the early concept art, and mistranslated the Japanese word for hedgehog harinezumi literally as "hari" and "nezumi", or "needle" and "mouse": two words instead of one, an error a native Japanese speaker wouldn't have made. For better or worse, this stuck around long enough that when Sega was making Sonic the Hedgehog 4 in 2010 they used "Project Needlemouse" as the codename, and it eventually led back to being included on the test for Naka-san to find.