Socks the Cat Rocks the Hill

Socks the Cat Rocks the House, also known by its Super Nintendo name Socks the Cat Rocks the Hill[2], is an unreleased Sega Mega Drive action platform game developed by an unknown studio[5] and scheduled to be published by Kaneko USA.[1] Starring the titular Socks Clinton[1] (pet cat of 42nd President of the United States Bill Clinton) in an attitude-colored mascot platformer role, it was first advertised for a November 1993 release date[2], only to be eventually pushed back to March 1994[3], with the final possibility of a launch the following month[4] being missed entirely. 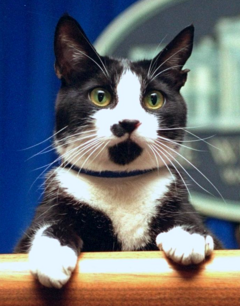 Socks Clinton was known for his adventurous personality.

Socks the Cat Rocks the House features straightforward action platform gameplay with light puzzle platforming elements. Socks has the ability to claw at enemies in a basic melee attack, and can later acquire a power up which grants him a simple projectile attack. Overall, more emphasis is placed on the game's political satire than its actual mechanics, under the likely assumption that its star feline and the title's unique premise would be enough to carry its sales.

While the Mega Drive version remains undumped, and was developed by an entirely different company, the two were working off the same shared design document and overall premise, and if released would have resulted in two very similarly-playing games.

As one of the Western world's more high-profile unreleased games, Socks the Cat Rocks the House saw a significant amount of investment from Kaneko USA, and is assumed to have neared completion before the publisher's closure caused its late cancellation. Since then, the mascot platformer's unique history has provided the gaming community with a particular amount of intrigue over its content and current whereabouts.