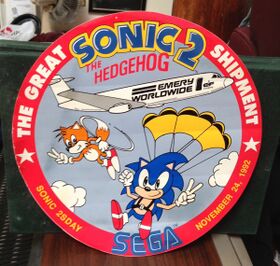 Sonic 2sday was a significant accomplishment for Sega of America.

Sonic 2sday was a Sega of America marketing campaign centered around the Western release date of Sonic the Hedgehog 2, Tuesday, November 24, 1992. Created by Director of Global Marketing Al Nilsen, the campaign was highly promoted, and its success further established Sega as a household name.

The name is a portmanteau of the words Sonic 2 and Tuesday.

Sonic 2sday is the first significant occurance of a synchronized game release date. Previously, games would begin showing up in stores at irregular dates, with some retailers not getting stock until well after others. Sonic the Hedgehog 2‘s American and European releases were locked to a single day, building excitement by giving buyers a calendar date to anticipate.

The video game industry would later adopt Al Nilsen’s model as the de-facto standard. Games are generally available on a publically-known date, much like movies. Additionally, video games are often still released on a Tuesday.