Welcome to the Next Level 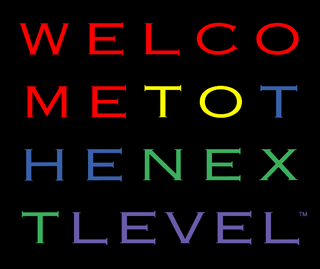 The "Welcome to the Next Level" slogan, used across the entire Sega gaming range in North America for a short period.

While certainly turning heads with its Genesis Does campaign, much of Sega's North American image in the home console market during the early 1990s was characterised by the works of Goodby Silverstein & Partners, which managed Sega's marketing budget between 1992 and 1996. GSP started its hard-hitting campaign in 1992 with the introduction of a slogan "Welcome to the Next Level", originally brought in to maximise sales of the Sega Mega Drive (Genesis) and Sega Game Gear, and soon adapted for the Sega Mega-CD (Sega CD) upon its own launch in the latter part of the year, as well as the 32X and for a brief time the Sega Saturn later on.

Following its success in North America, Sega adopted "Welcome to the Next Level" across the world. It was translated into Portuguese for the Brazilian market (as "Bem-vindo à Próxima Fase"), Portuguese market (Benvindo ao Próximo Nível") Spanish ("Bienvenido al Proximo Nivel") and also appeared in early Japanese Saturn advertising. Usage of the slogan also occurred in some of the company's amusement venues; it was adapted as "Welcome to VirtuaLand" for the entrance facade of Sega VirtuaLand, and most significantly appeared in a long-standing capacity at Tokyo Joypolis, where it remained on one of the center's escalators until a refurbishment in 2012.

The campaign coincided with Sega's decision to introduce more uniform packaging for its products (a red striped design for Genesis, purple for Game Gear, blue for Sega CD and later yellow and white for the 32X and Saturn, respectively).

GSP would also introduce the Sega Scream in 1993, which carried through most of the 90s and was even being revived in the early 2000s, such was its popularity.