Burning Rangers (バーニングレンジャー) is a Sega Saturn firefighting action game developed by Sonic Team and published by Sega. First released in Japan in February 1998, players take on the role of a new recruit in a futuristic firefighting organization, and are tasked with rescuing survivors and extinguishing fires in a variety of unique levels. Boasting high production values and an emphasis on characterization, Burning Rangers is one of the more fondly remembered of Sonic Team's original games, and one of few that have not been ported to any other platform. 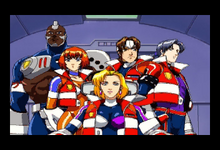 The game is set in a futuristic society in which fire is one of the few major hazards remaining. The Burning Rangers are an elite group of firefighters who are dispatched to emergency incidents to fight fires and rescue people in danger. 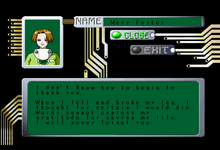 The game is a 3D action platformer with a third-person perspective played in the corridors of burning buildings and space ships. Each mission has an objective for completion, and the Rangers must also locate and rescue stranded civilians by collecting energy crystals dropped from extinguished fires. Rangers occasionally encounter hostile robots during their missions. Each stage ends with a boss battle, which include fire-breathing flowers and robotic fish. The player assumes control of one of two apprentice Rangers, Shou or Tillis. Since there is no in-game map, the Rangers rely on a voice navigation system to find their way. The player can move the camera by holding

and moving the D-Pad. The player can also swivel the viewing angle 90 degrees left with

and 90 degrees right with

, which can be used to look around corners while running through them.

Rangers are moved with the D-Pad (or the analogue stick when using a 3D Control Pad). Rangers are equipped with a jet pack, which is activated with

. The jet pack thrusts the Ranger into the air. The Ranger can get an additional boost when in the air by pressing

again; holding the button engages the thrusters for longer. The player can perform rolls and somersaults by pressing in a direction after boosting. Rangers automatically jump over small gaps while running over them. They also grab automatically grab ledges if they fall short of clearing a jump. Sometimes a wall or floor explodes; explosions are preceded by whistling sound, and the Ranger can backflip to avoid the explosion by holding

Rangers are equipped with laser guns for putting out fires. They fire a pulse with

. The intensity of a fire can be determined by its color: red flames are weak and generally extinguished in one shot, while blue flames are strong and require multiple shots. Green flames belch fireballs at the Rangers. Fires leave crystals when they are extinguished, which can be collected by moving the Ranger near them. Red crystals are worth one crystal energy unit, and green crystals are worth five crystal energy units. Additionally, the Rangers can charge a powerful laser blast by holding

and fire by releasing. These blasts are the only way to damage enemy robots and bosses; the Ranger automatically aims at the nearest enemy. They are also more effective at extinguishing fires than standard pulses, able to extinguish regular fires in fewer hits as well as able to extinguish larger fires that pulses cannot, but fires put out with laser blasts do not leave crystals.

Crystals function similarly to rings in the Sonic the Hedgehog games: possessing at least one crystal allows the Ranger to survive damage from an enemy or fire. Taking damage scatters the Ranger's crystals, which can be collected again, and renders the Ranger vulnerable to death. In addition to finding crystals after extinguishing fires, crystals can be found preplaced in levels. Rangers are equipped with remote transportation devices and use crystals to transport survivors after locating them. Survivors are automatically transported when a Ranger walks near one, at the cost of five crystals. The player receives a continue for transporting a survivor with ten crystals. Rangers are revived at the last rescued survivor after dying (as long as the player has continues remaining).

Players are guided through each mission by Chris, the team navigator. She provides directions to survivors as well as helpful information about nearby hazards and objectives. The player can radio back to Chris at any time with

Environments contain several doors. Blue-striped doors can be passed through, and yellow-striped doors are locked. Doors with red stripes on the other side cannot be re-entered after they close. Rangers can unlock doors by finding consoles and activating them with

when standing in front of them. Sometimes the Rangers must obtain an ID card to proceed.

The Danger Limit Readout System acts as a timer for each mission. It increases gradually as the mission progresses. For every 20% that the limit increases, the surrounding area is engulfed in flames and explosions for a few seconds. If it reaches 100%, the area is constantly bombarded with explosions. The meter is reduced by extinguishing fires and rescuing survivors but cannot be lowered past the last 20% threshold. A bar at the top of the screen visually indicates how close the limit is to the next 20% increment.

At the end of each stage, the player receives a rank, with S being the highest and D being the lowest. The rank is based on the number of survivors rescued, the number of crystals at the end of the mission (including crystals used to transport survivors), the time taken to defeat the boss, and the limit percentage at the end of the mission. Once the game is completed, a random generator mode is unlocked that mixes up the order of corridors in the game's missions, with a potential total of 3,125 unique routes, as well as the locations of switches and survivors. The player can replay completed stages to earn higher ranks and to find more survivors. There are 108 total survivors in the game.

Every survivor has a name and sends mail to the player after being rescued (which can be accessed from the main menu). Sonic Team members make cameos as survivors, including Yuji Naka and Naoto Ohshima. Claris and Elliot from NiGHTS into Dreams also appear as survivors. Sonic Team members send secret passwords and bonus pictures when rescued, including passwords that allow playing as the other Rangers on each mission. The game uses the Saturn's internal memory or a backup cartridge for saving, but the password feature unlocks after completing the game for replaying the same randomly generated missions or accessing bonus content. Passwords are given after completion of a mission.

The concept originated with the idea of rescuing people as opposed to killing them, which was an element that producer Yuji Naka felt was too common in contemporary video games. The team chose firefighters because they felt that fire was an effective way to create a suspenseful atmosphere.

The game's characters were designed by Naoto Ohshima. The cover art was drawn by anime artist Hiroyuki Ochi. Yuji Naka has stated in interviews that Sonic Team wanted the silhouette of a Burning Ranger wearing a jet pack to resemble that of an angel.

A downloadable mission making many references to Burning Rangers was created for Sonic Team's Phantasy Star Online. A race track based on the game, Burning Depths, was featured in Sonic & All-Stars Racing Transformed. 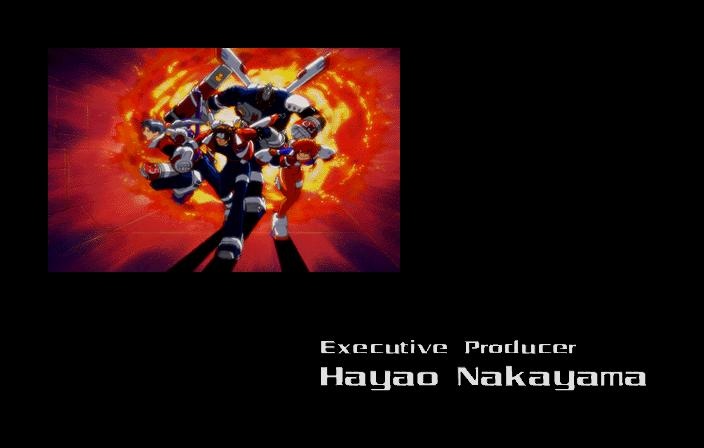 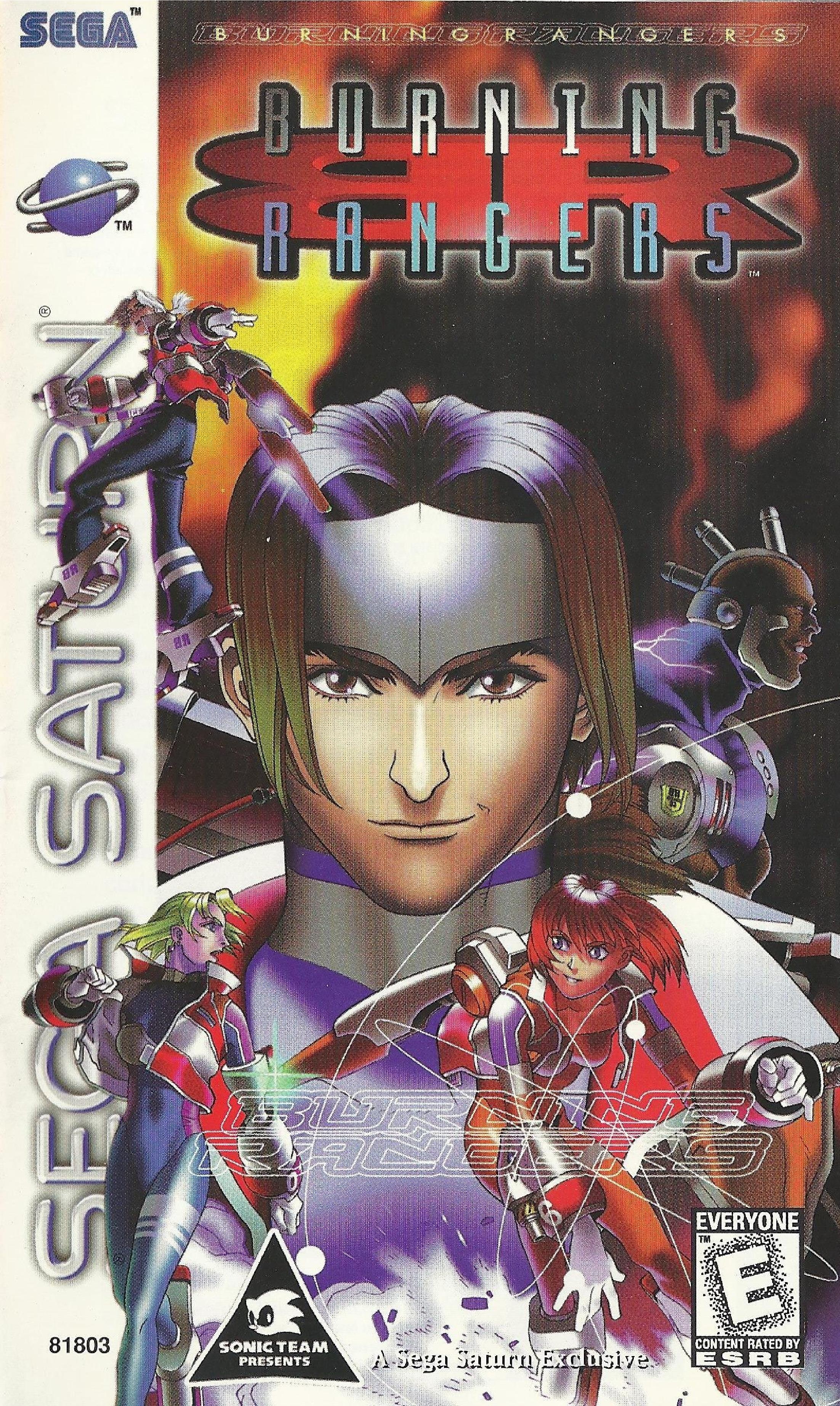 The game makes use of the Saturn's internal battery back-up as well as the Saturn Backup Memory to save progress through the game as either playable character. You can save up to three saves on either the internal back-up or the RAM Cart.