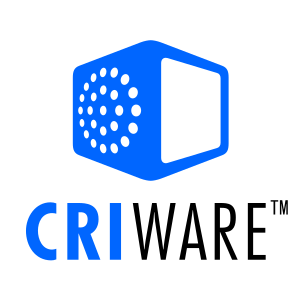 These products and services are now offered by CRI under the collective name of "CRIWARE".

ADX is a streamed audio format which allows for multiple audio streams, seamless looping and continuous playback (allowing two or more files to be crossfaded or played in sequence) with low, predictable CPU usage. The format uses the ADPCM framework. It is now known as CRI ADX.

Sofdec is a streamed video format supporting up to 24bit color which includes multistreaming and seamless playback with a frame rate of up to 60 frames per second. It is essentially a repackaging of MPEG-1/MPEG-2 video with CRI's proprietary ADX Codec for audio playback. It is now known as CRI Sofdec.

Clipper is an automated lip-syncing program which analyzes waveforms and outputs an appropriate lip pattern into a text file, for later substitution into the facial animations of the (in-game) speaker. It is now known as CRI Clipper.

ROFS is a file management system for handling a virtual disc image, an extension of the CD-ROM standard. It has no limitations on file name format, or number of directories or files, and has been designed with compatibility with ADX and Sofdec in mind. It is now known as CRI ROFS.

Sound Factory is a GUI-based video game audio tool for effective sound design without input from programmers. It has support for the previewing and playback of generated audio. It is now known as CRI Sound Factory.

Movie Encode is a video encoding service by which CRI generates Sofdec or MPEG files from other media. For a fee (designated by the length of the file to be encoded), files are converted to the desired format with the quality specified by the client. It is now known as CRI Movie Encode.