Jet Set Radio for the Game Boy Advance is a watered-down version of Jet Set Radio, originally released for the Sega Dreamcast. It was developed by Vicarious Visions and published by Sega and THQ. As with the original, it is called Jet Grind Radio in the US.

The Game Boy Advance Jet Set Radio utilises the same engine used by Vicarious Visions for their conversions of games such as Tony Hawk's Pro Skater 2, which provides a top-down isometric perspective using relative controls and simple 3D models representing the characters. Based on De La Jet Set Radio, environments were altered slightly to better suit the handheld's hardware and screen resolution. It also has two features not seen in any other version of the game; Professor K is a secret character in the game and is made available when certain conditions are met, and up to four player multiplayer is supported (which each player requiring their own system and game pak). 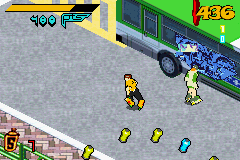 Two players attempt to tag the most graffiti spots in Turf Wars.

Up to four players, each with a game pak, can participate in multiple game modes. The amount of stages, characters and game modes available depends on the progress of the host player's game progress. A winner is declared once time runs out.

The game also allows players to pair in teams based on four different colors, yellow, blue, green and purple.

Due to limited cartridge space, the music was remixed by studio Shin'en Multimedia who were able to remix six of the songs into shorter loops with a limited sound set. None of the licensed songs were brought over.