Native American storytellers would demonstrate different skills for surviving in the wild, which would later be tested during "adventure" segments of gameplay. These would be broken up by more action-oriented segments, such as white water kayaking on Idaho's Lochsa River, high-speed skiing, and rock climbing, and puzzle segments involving spirit animals and geothermal geysers.[3][1]

Briefly described in the January 7, 1995 issue of Billboard magazine as an "outdoor adventure game"[2], Legacy was one of few Pioneer LaserActive titles produced by a Western developer. 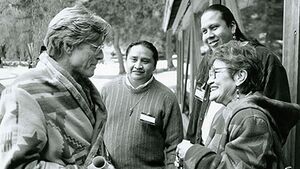 Footage for the game was shot in Yellowstone National Park, and included scenes of the park's native gray wolves.[1][3]

It is assumed the game was not far along in development before its cancellation due to poor Pioneer LaserActive sales.[3]

Oakland, California-based Illumina Productions had worked with director Robert Redford before. Redford was directly involved in the production of the game Imagynasium[5], and was also likely involved with another, BackStage[6]; both of these games were in some part funded and supported by Redford's Sundance Institute.

Founded to assist and promote independent filmmakers, theatre artists, and composers, the nonprofit organization created an initiative to support Native and Indigenous artists in 1994.[7] This initiative to showcase Native culture is assumed to be the inception for Legacy, with Sundance Institute again providing funding and support for Illumina Productions.